Straight to jail for Jamal

SEPANG: Datuk Seri Jamal Yunos stepped off the aircraft and was taken straight to court as he was deported back to Malaysia after being on the run for over a month.

The fugitive politician was whisked off to the Ampang magistrate’s court upon arrival at the KL International Airport at about 3.15pm.

He claimed trial to a charge of fleeing police custody under Section 224 of the Penal Code, which carries a jail term of up to two years, a fine or both.

From court Jamal was taken to the Sungai Buloh prison as he was denied bail.

The Sungai Besar Umno division chief, who was wont to make headlines for the wrong reasons, was arrested while having a haircut in Jakarta on Monday.

Yesterday, Jamal told the court that he thought he had previously completed the remand process with no further instructions for him to comply.

“I thought I had fulfilled my responsibility as a Malaysian citizen,” he said.

Describing his month-long stay in Indonesia as a “nightmare”, Jamal said he had escaped the country as he grew frightened when the Malay­sian Anti-Corruption Commission (MACC) and the police raided his house.

Defence lawyer Izzat Amir argued that Jamal should be granted bail as it was a mere miscommunication that had caused his client to flee police custody without completing the remand process on May 25.

Magistrate Mohd Firdaus Sadina Ali fixed July 30 for the next mention of the case.

Earlier at KLIA, Jamal was escorted to a waiting police vehicle through an internal passage.

Another of his lawyer, Datuk Imran Tamrin, said his client was ready to face legal action.

“I saw him briefly while he was in Indonesian police custody.

“I feel that he is ready to face all the char­ges against him,” he told reporters.

Apart from six offences, Jamal was also being investigated by the Immigration Department and MACC, he added.

Selangor police chief Comm Datuk Mazlan Mansor said Jamal would also have to answer to other outstanding warrants of arrest.

The six offences include creating public nuisance by breaking bottles of alcohol to protest the Better Beer Festival on Oct 5 last year.

The police launched a manhunt for Jamal after he went missing from his ward at Ampang Puteri Specialist Hospital on May 25.

An arrest warrant was issued on June 1.

Malaysian police later sought help from their Indonesian counterparts to extradite him. 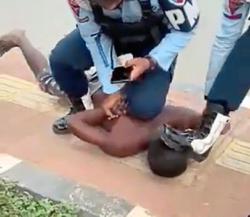