Thai army: 41 bombs seized from militants were made in Malaysia 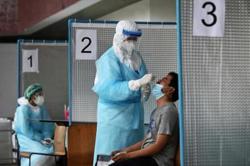 BANGKOK: 41 homemade bombs seized in southern Thailand's Takbai district several days ago were produced in neighbouring Malaysia and meant for attacks after Ramadan.

This was according to the Thai Army, which concurred with a statement by the Narathiwat police several days ago, on the bombs' origin.

According to Fourth Army Region commander Lt Gen Piyawat Nakwanich, the home-made bombs were meant for use in "staging attacks" by militants after the fasting month of Ramadan.

"From our investigations, we found that the bombs were smuggled in from Malaysia," he said.

The general, who is the Thai Army's highest-ranking officer in south Thailand where a low-level insurgency has been ongoing, added that they had not determined if the bombs were smuggled in complete form or in parts (and then assembled in Thailand).

The homemade bombs were seized at a police checkpoint in Kampung Saring, Takbai three days ago, which also saw the arrest of a 39-year-old driving a pick-up truck.

Also found in the vehicle were timers for the explosives and several communication devices, which according to explosive, ordnance and disposal (EOD) officers at the scene, could be used to remotely detonate bombs.

Piyawat, the man entrusted by Bangkok to quell the armed unrest in southern Thailand, repeated the allegations about Malaysia being the source of the homemade bombs, which had first been made by Narathiwat police chief Maj Gen Manas Sikamat.

The bombs, according to him, were smuggled into southern Thailand via a "natural border route", with many speculating that the narrow Sungai Golok river separating the two countries was used to bring in the explosives (via small boats).

Sungai Golok river, which is notorious for smuggling activities, also acts as a natural border between Thailand and Malaysia.

The official border crossing goes from the town of Sungai Golok in Narathiwat province to Kelantan's Rantau Panjang.

Investigators said the pick-up truck loaded with the home-made bombs came from Sungai Golok and was stopped in Takbai (a coastal border town near Tumpat, Kelantan) as it was being delivered to an unidentified individual further inland at Ranget, Narathiwat.

The army general also said that authorities had intensified efforts to track down a suspect linked to the bomb seizure, who managed to flee and is believed to have gone into hiding.

Despite the seizure of the bombs, Piyawat said the situation in southern Thailand was improving.

He pointed out that out of the 10 violent cases in southern Thailand, only a few were related to the ongoing armed conflict while the rest were personal disputes.

According to non-governmental organisation Deep South Watch, which monitors the situation in southern Thailand, about 7,000 people have lost their lives since 2004 as a result of the armed conflict in the four southernmost provinces near the Thai-Malaysian border. – Bernama