A lady of firsts

SHE walks in quickly, all smiles and no airs, and sits down, apologising as she does for not shaking our hands. Malaysia’s first female Deputy Prime Minister is a woman in a hurry. So much to do, so little time is the impression one gets.

In some ways, things have come full circle, for it has been nearly two full decades since her husband was shockingly ejected from the Deputy Prime Minister’s chair.

Now he is free from jail, and she is in the thick of things in the new government.

Datuk Seri Dr Wan Azizah Wan Ismail may be a symbol of the Reformasi movement, but she has no intention of being a symbolic appointment.

Her focus is firmly on the task of bringing women’s safety and rights up to par. She has a string of programmes and legislation to work on.

“This ministry is not just for women per se, I think it’s for all Malaysians in a way. Women hold up half the sky, and men are in the equation too. I want to focus and emphasise the family unit, and how it’s important for the roles of men and women to be complementary.”

She cites her mother as a role model.

“She was formerly an educator. But she brought us up with the idea that it is important to study, to have good manners, and plan for the future. Those are quiet values that shape who we are.”

Of course, not every plan of the Pakatan Harapan government has taken off without a hitch, she concedes.

“We wanted to do the EPF contributions but then there is Section 51 that we cannot go against, so we have to work around it. 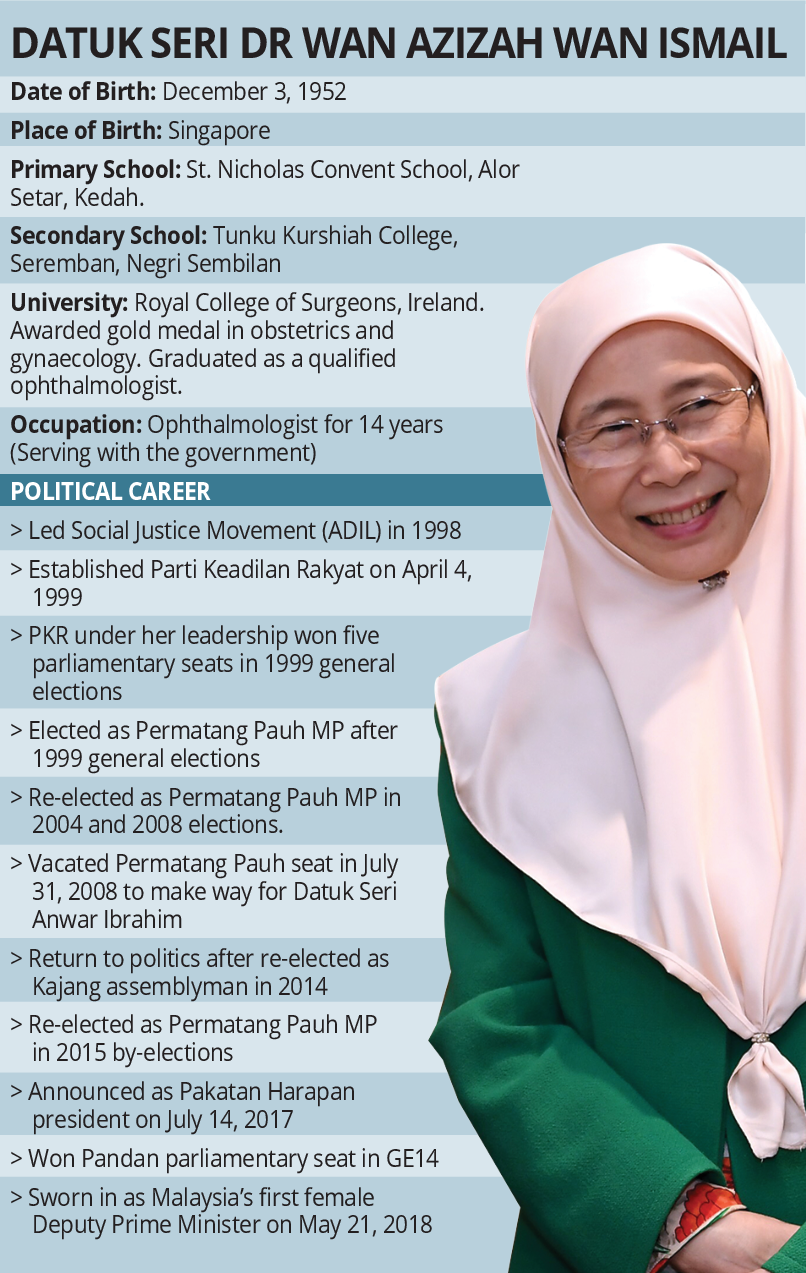 “I even asked the Finance Minister, ‘Can we have just a volunteer section, about 30,000 husbands contributing for housewives?’ but it’s still not that easily done because it can incur costs.”

Then there is the women’s representation issue – Pakatan’s manifesto called for at least 30% of the country’s policy makers to be women but that has not happened in the state excos.

“It is a target that we talk about. I spoke to the PM yesterday; he did mention, he was thinking of how to get the cabinet balanced and how to consider different parties, and I looked at him and said ‘and women too’.

“There are some new phases and changes in the Cabinet coming, but I also want to add that we want women to be recruited based on capability and their qualification, not just because of gender.”

Dr Wan Azizah says that the global reaction to the #MeToo movement has brought fresh attention to the need for a sexual harassment act.

“Women do not like to be treated as sex subjects. You should treat us with dignity, and respect. At the moment, we as employees are protected at the workplace. But outside work, there is a gap.””

Dr Wan Azizah also moots the possibility of setting up a women empowerment and leadership institute.

“All of these things are on the cards – that we want to be something, make a change and difference in society.”

At the same time, Dr Wan Azizah says the public should take note of the Domestic Violence Act 2017, as among the amendments coming into effect this year, was the Emergency Protection Order, under which protection must be given to the victim within 24 hours.

According to Dr Wan Azizah, officers from the Social Welfare Department (JKM) will be placed on call 24/7 to assist victims.

“The victims will then be taken away from their aggressors and they will be removed from adverse situations and conditions,” she adds. She also points out the Penghunian Ekslusif Kediaman (Exclusive Residential Rights) as enshrined in the Act, where alleged aggressors must vacate the house of the victim, should he or she decides to return home.

“There’s at least something. Not many people know about that. If you have an abusive husband, he has to leave the premises.””

With the Women Ministry under her helm, Dr Wan Azizah says the Indira Ghandi custodial episode will not be forgotten, as she will be pushing for justice over the matter.

“You can’t interfere with the Federal Court. If the Federal Court has already made a decision, the parent has to give way,” she notes. On children’s safety, Dr Wan Azizah says the presence of a public child sex offenders’ database could prevent paedophile cases in the future.

“I think it’s important. Otherwise, we will go through again the painful episode of Richard Huckle,” she says, referring to a serial paedophile who preyed on impoverished Malaysian childen.

In noting that the Sexual Offences Against Children Act 2017 was passed last year, Wan Azizah stresses that public awareness and understanding is imperative.

“A law is just a law. It is how people make use of it that will show its effectiveness. That is why awareness is very important.”

Dr Wan Azizah says the public shouldn’t turn a blind eye on potential child abuses happening in their own backyard, as under Section 19 of the said Act, anyone who fails to report sexual abuse is liable to a fine not exceeding RM5,000.

“It is an offence if you do not report sexual abuse. So, you have to do that,” she adds.