Dr Mahathir added that investigators have “an almost perfect case” against the principal suspects of the troubled fund.

Investigators, he added, were looking at bringing multiple char­ges against Najib. 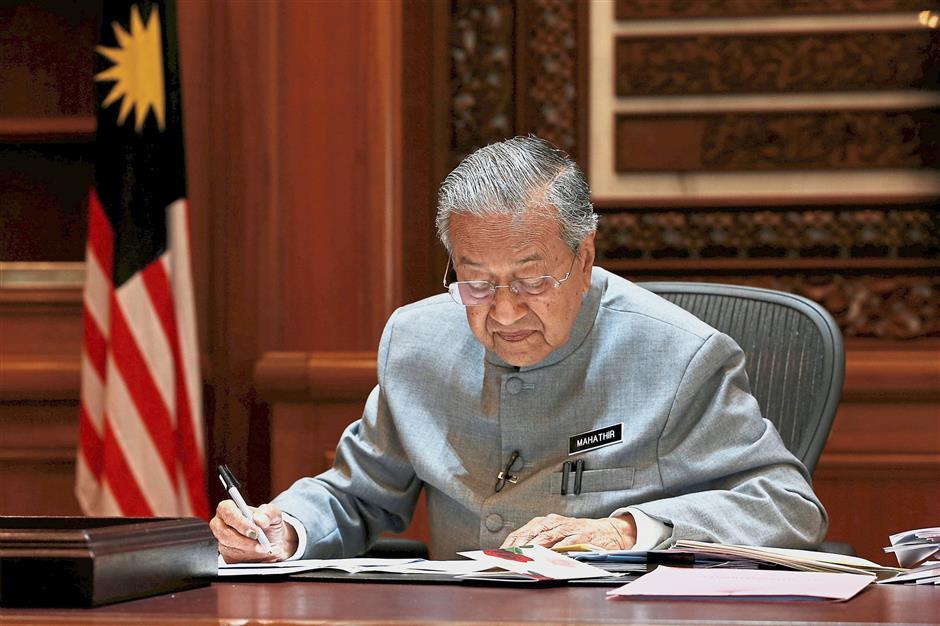 Putting it all together: Dr Mahathir going through his notes at his office in Putrajaya.

“He was totally responsible for 1MDB,” said Dr Mahathir.

“Nothing can be done without his signature, and we have his signature on all the deals entered into by 1MDB. Therefore, he is responsible,” he added.

He said the former premier’s wife, Datin Seri Rosmah Mansor, was also under investigation in connection with the 1MDB scandal.

“Some of the money is believed to have gone to her, lots of money.

“We know about this, but finding the paper trail is a bit more difficult in this case because she doesn’t sign any papers. Najib signs a lot of papers,” he said.

Dr Mahathir said the investigators were being thorough as the Government could not afford to lose the case once it was brought to court.

“When we go to the courts, we will have clear evidence of the wrongdoing. We cannot afford to lose,” he said.

Najib and his wife Rosmah are among the suspects in the ongoing 1MDB investigations.

He said that he was hopeful that a trial can begin by the end of this year, adding that the first arrest related to the 1MDB scandal was expected to be made in the next few months.

“We are working as hard as possible at a furious pace.

“We think that we already have almost a perfect case,” Dr Mahathir said, adding that other targets include controversial businessman Jho Low.

Najib is currently barred from leaving the country as authorities continue to search properties linked to him.

He and Rosmah have also been questioned by the Malaysian Anti-Corruption Commission (MACC) into the matter related to the 1MDB saga.

The United States Department of Justice has claimed that more than US$4.5bil was misappropriated from 1MDB and that about US$700mil of the money ended up in Najib’s personal bank ac­­counts.