Done deal: Shafie signing his oath as Liew is sworn in at the Sabah State Assembly in Kota Kinabalu. — Bernama

However, Tan Sri Musa Aman’s lawyers said the latter wanted to continue with the legal battle to overturn his leadership.

The emergency sitting called yesterday by Yang di-Pertua Negri Tun Juhar Mahiruddin was boycotted by 21 Opposition assemblymen after they failed to get the courts to halt it.

“We are in charge of the state,” Shafie declared to reporters after receiving the vote of confidence.

“Our job now is to govern and serve the people as best as we can,” he added.

Shafie called on the Opposition “not to drag your political games”.

“I believe whatever further court action after this point will be just academic,” he said in reference to moves by Musa, Umno’s Sungai Sibuga assemblyman, and PBS’ Tamparuli assemblyman Datuk Jahid Jahim to seek a court order to declare Musa as the legitimate Sabah chief minister. 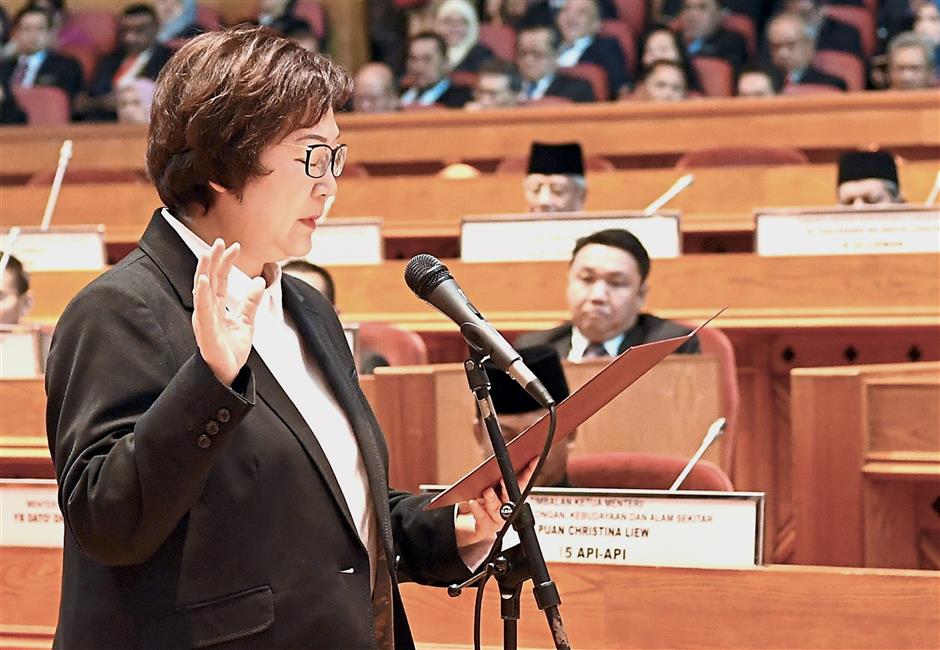 Done deal: Shafie signing his oath as Liew is sworn in at the Sabah State Assembly in Kota Kinabalu. — Bernama

The May 9 general election left Sabah with a hung assembly, with Sabah Barisan Nasional, Warisan and its partners Upko, PKR and DAP securing 29 seats each.

With its two seats, Sabah STAR turned kingmaker and Musa ma­­naged to get sworn in as chief mi­nister the next day with its support.

However, his government collapsed on May 11 with Umno assem­blymen and Upko pledging support for Shafie, which meant the latter got the backing of 37 reps.

Tun Juhar, who has lodged a criminal intimidation report against Musa following the latter’s rushed swearing-in, appointed Shafie as chief minister on May 12.

Shafie said the verdict at the state assembly clearly proved that the people’s wishes have been upheld.

On the assemblymen who did not turn up for their swearing-in, Shafie said they have 90 days to take their oath of office.

“If they fail to do so without any valid reason, they will lose their seats and by-elections could be held,’’ he added.

Earlier, in tabling a motion of confidence on Shafie, Deputy Chief Minister Christina Liew said the state assembly was the best venue for Musa and other Opposition members to fight their case.

“But Musa and his backers are not even here, they did not even have the courage to come,’’ she pointed out.

Liew dismissed claims that the emergency sitting was not in accor­dance with the state constitution, adding that it was called by the governor.

The sitting, which was presided by Speaker Datuk Syed Abas Syed Ali, saw the swearing-in of a total of 43 assemblymen including Sha­fie.

Under the Sabah Constitution, six persons can be nominated as assemblymen on the advice of the chief minister.