Rosmah arrives at MACC HQ to have her statement recorded

PUTRAJAYA: Datin Seri Rosmah Mansor has arrived at the anti-graft body's headquarters Tuesday to have her statement recorded to the authorities over a corruption probe.

She arrived at 10.45am clad in a blue baju kurung and red headscarf.

Rosmah, who is the wife of former prime minister Datuk Seri Najib Tun Razak, was a picture of calm as she stepped into the Malaysian Anti-Corruption Commission's building.

She was accompanied by her daughter Nooryana Najwa Najib and son-in-law Daniyar Kessikbayev and two lawyers.

Just about two weeks ago, Najib was questioned in the investigation related to SRC International Sdn Bhd. Both Kumaraendran and Datuk Geethan Ram Vincent are representing Rosmah.

Security at the MACC headquarters has been tightened, with reporters having to record their names at the main gate and their bags checked.

Officials said this is to ensure that only accredited reporters are allowed in for the coverage.

SRC International was a subsidiary of 1Malaysia Development Bhd (1MDB), which was subsequently placed under the Finance Ministry in 2012.

Najib has so far been questioned three times by MACC over SRC International.

On Dec 5, 2015, MACC took a statement from Najib over its probe into SRC and the RM2.6bil deposited into his personal account.

He was questioned again for five hours on May 22 and called back on May 24 for further questioning.

Media gathers at MACC HQ ahead of Rosmah's arrival 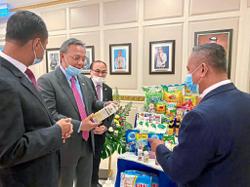