Protest at Istana Negara over AG appointment fizzles out

PETALING JAYA: A non-governmental organisation staged a protest at Istana Negara over the appointment of Tommy Thomas as the new Attorney-General (AG), but only four people turned up.

However, Zahlan said since the Palace has announced the appointment of Thomas as the AG, they had to “agree”.

“We have to agree (akur) because we do not want to be labelled as rebellious (derhaka),” Zahlan told the press during the four-men protest on Tuesday (June 5) morning.

He also called for Pakatan Harapan to fulfil its manifesto, criticising the new government for making allegedly irresponsible statements that jeopardise the country's economy, amongst other things.

Earlier Tuesday, the Comptroller of the Royal Household Datuk Wan Ahmad Dahlan Ab Aziz said the King, on the advice of the Prime Minister, has given his approval to the appointment of Thomas as the AG according to Article 145 (1) of the Federal Constitution.

The King, said Wan Ahmad, also called on Malaysians to accept the appointment of the AG, adding it should not create conflict as every Malaysian should be treated fairly regardless of their race or religion.
Article type: metered
User Type: anonymous web
User Status:
Campaign ID: 46
Cxense type: free
User access status: 3
Join our Telegram channel to get our Evening Alerts and breaking news highlights 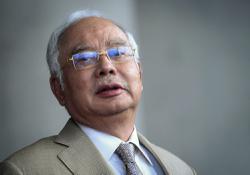