In an May 28 interview, Dr Mahathir was reluctant to acknowledge his role in building a flawed political system that led to systematic power abuse during former prime minister Datuk Seri Najib Tun Razak's administration.

“When I was in power, I was no authoritarian,” Dr Mahathir said, dismissing his pre-election public apology for politeness and “Malay custom”.

“The fact is that people say I did something wrong. I do not agree with them,” he was quoted as saying.

Financial Times said Dr Mahathir's "revolutionary changes" answers his detractors who labelled him as "authoritarian" and a "dictator".

Dr Mahathir responded to those labels, saying that it does not affect him.

“When I came back into politics, I found that the labels that I got tend to cause people to believe that I was really like that and therefore they should reject me.”

“Now, if they say anything, I’m already Prime Minister. The most they can do is to throw me out,” he said.

Dr Mahathir also insisted that his former deputy prime minister Datuk Seri Anwar Ibrahim had learnt his lesson after being sacked and subsequently incarcerated on sodomy charges in 1998.

“I think he is quite a different man now. I think he realises that things do not just go the way you want it to go. So he will have to be a bit more patient,” Dr Mahathir said of Anwar who is expected to take over the Prime Minister's position in two year's time.

However,  Dr Mahathir apologised for appointing Najib to his cabinet and promoting him in the latter's bid to become Prime Minister in 2009.

He described it as the “biggest mistake” of his life.

Dr Mahathir told Financial Times that his priority now is to restore democracy in Malaysia and reduce the capacity for abuse by the Prime Minister.

“Soon I’ll be 93... I will try to accomplish as much as possible in the short time given to me,” he said.

Yet, Dr Mahathir admitted that racism in the government still runs deep.

“At the top level, there’s less racism in this government,” he said. “But at the ground level, the racial feeling is still very strong.”

On the international diplomacy front, Financial Times said the return of Dr Mahathir will reverberate beyond Malaysia as he renews working relationships with old friends such as Russia’s Vladimir Putin and Turkey’s Recep Tayyip Erdogan.

Najib, known to be close with US president Donald Trump, a relationship Dr Mahathir said he has no plans to pursue for now.

“I don’t know how to work with a person who changes his mind overnight,” Dr Mahathir said.

“For example, he wants to meet the president of North Korea, then he doesn’t want to meet, and now he’s saying maybe it’s going to happen,” he added.

Dr Mahathir, however, said he has always supported the rise of China even before the territorial dispute with Malaysia over the South China Sea.

He also warned that South-East Asian nations have to be careful with how hard they push back against Beijing.

“The powerful will take what they will, the weak will concede what they have, what they must,” he said.

“I think the people of Singapore, like the people in Malaysia, must be tired of having the same government, the same party since Independence,” he said of the long-ruling People’s Action Party. MInister: Beijing not advancing claims in South China Sea with Covid-19 as cover 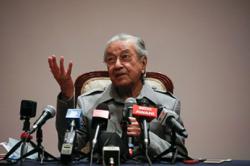 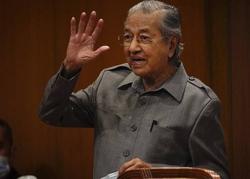