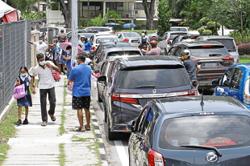 NUTP secretary-general Harry Tan said the system required teachers to carry out loads of tedious paperwork which takes up a lot of time.

“NUTP has received many complaints from teachers regarding SKPMg2. It is time-consuming and reduces face time between students and teachers,” he said in a statement yesterday.

Tan added that NUTP has received “evidence” in the form of pictures which showed the amount of unnecessary paperwork tea­chers had to do under the system.

“Teachers should be focusing on teaching instead of carrying out administrative duties,” he added.

The SKPMg2 was launched by the ministry’s Inspectorate of Schools in September 2017, with the aim to determine the level of achievement and quality of schools.

It is a system that categorises national primary and secondary schools from Bands 1 to 7 based on their performance.

Band 1 is for top performers while Band 7 is for low-performing schools.

Under the new system, academic performance is no longer used as the main criterion for grading schools.

Focus was to be on other areas, such as school administration and student discipline.

SKPMg2 was scheduled to start in October 2017, but was put on hold by former education minister Datuk Seri Mahdzir Khalid after various technical problems cropped up during the implementation process.

Tan said NUTP attended a “special meeting” with the Inspectorate of Schools on Nov 6 last year and had put forward a few suggestions to reduce the “paperwork burden” of teachers.

Among the suggestions were designating the “keying in” process to ICT teachers, storing data in softcopy form, storing existing file systems in a location that is easy to manage and using SKPMg2 as a guiding system, he said.