KUALA LUMPUR: He was once discarded from Bukit Aman following the 1Malaysia Development Bhd (1MDB) controversy, but Datuk Abdul Hamid Bador (pic) has made a return to the Federal Police hierarchy.

He virtually left the police force as the Bukit Aman Special Branch deputy director but he is now returning to lead the department.

Initially Comm Mohd Mokhtar’s contract extension was supposed to end in September but it has been brought forward.

In 2015, Abdul Hamid was transferred to the Prime Minister’s Department to oversee security and transnational issues after 37 years with the Royal Malaysia Police (PDRM).

Abdul Hamid reportedly said that he had been kept in the dark on his transfer order.

He claimed that he was just told to report to the Prime Minister’s Department on Sept 2, 2015.

At a press conference held the same year, Abdul Hamid alleged that there were “invisible powers” who were uneasy with him being the Number Two in the Special Branch.

He had said this might have had to do with him insisting that the 1MDB issue be fully investigated.

Abdul Hamid also said the Special Branch had advised the Government to explain the issue clearly to the people and urged those involved in it to also come forward to explain. 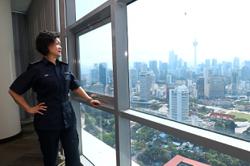