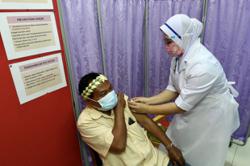 IN previous general elections, Barisan Nasional won handsomely in the parliamentary seat of Tanjung Malim. Hence, it is logical to expect it to be a very safe constituency for Barisan in this general election (GE14).

However, the new Barisan candidate for this constituency in the southern part of Perak is fully aware he cannot rest on past laurels as the current political situation has turned fluid.

“I am working very hard to win over the hearts of voters here. At the end of each day, I will review the situation with three state candidates to assess our support level,” says Datuk Dr Mah Hang Soon, Perak MCA chief, as he wipes off drops of sweat dripping from his forehead in a coffee place in Slim River in the constituency.

The 53-year old cardiologist-turned-politician takes cognisance of the challenges posed by the new dynamics, but he believes Barisan could iron out new problems.

The two most talked-about happenings in Tanjung Malim now are the intrusion of Mahathir’s influence into Felda settlements and a major protest staged at Putrajaya by Ong’s staunch supporters against the change in Barisan candidate.

According to local residents, former premier Tun Dr Mahathir Mohamad’s political ceramah in a Felda settlement and the removal of Ong as Barisan candidate are risk factors for the Barisan.

“We used to think the poll results to be 60-40 (in favour of Barisan) or even 70-30. But now we are not so sure, although many are betting Dr Mah will win,” says a restaurant owner in Slim River, a thriving town 20km north of Tanjung Malim town.

On Friday, Chinese newspaper China Press reported it would be a 50-50 contest in this parliamentary constituency.

On March 16, Pakatan’s big guns led by Dr Mahathir held a ceramah at Besout Felda Settlement to persuade the 8,000 settlers there to switch their support to the Opposition.

After March 16, Pakatan workers were able to enter Felda settlements to put up banners, flags and campaign.

“This is a huge breakthrough for us. It shows the settlers now recognise our existence.

“In the past, Felda settlers would form baricades to stop non-Barisan politicians from entering their areas,” says Chang, secretary-general of Perak PRK Youth, in a coffee shop in Kampung Baru in Slim River.

According to Chang, Felda settlers respect Mahathir, who they say did a lot to improve their livelihood during his 22-year rule.

Some are hoping that their cash flow problem arising from lower palm oil prices and other factors could be resolved if Mahathir becomes Prime Minister again.

As Felda settlers, who received RM5,000 from the Government for each household recently and RM15,000 in the last election and have been touted as Barisan’s “political fixed deposit”, any change of stance in this group can be a worry for the coalition.

However, Dr Mah tells Sunday Star he has been welcomed and well-received by Felda residents whenever he enters their settlements.

For Barisan, the other disturbing development is the April 26 protest staged at Putrajaya by 700 Barisan grassroots politicians from Tanjung Malim against the dropping of Ong as candidate.

Some protesters told the media that they would support the Opposition in the coming poll if Ong was not reinstated.

The Malays, who form the bulk of the non-technical employees in Proton, see hope in the revitalisation of the car maker after the entry of Chinese capital. New hope: The partnership of Proton with Geely has brought a lot of buzz to Tanjung Malim as Proton’s plant will be expanded to boost production there.

Ong was involved in the move to bring in China’s Zhejiang Geely Holdings Group as the strategic partner for national car maker Proton, which bled cash via huge debts for years.

The partnership with Geely, known for turning around Volvo, has brought a lot of buzz to Tanjung Malim as Proton’s plant will be expanded to boost production there.

It is uncertain how Ong’s supporters will act on polling day, even though he had said that he accepted the party’s decision not to place him as an incumbent candidate.

But soon after the Putrajaya demonstration, Ong – the MCA secretary-general – told his supporters to calm down and support Barisan in GE14.

The former Minister of International Trade and Industries also appeared at the Tanjung Malim nomination centre on April 28.

Ong’s advice to his supporters appears to have an impact. Met at a coffee shop in Slim River, four Ong supporters refused to talk to Sunday Star about GE14.

Ong, who is helping in the campaigns of other MCA candidates, also declined to be interviewed.

Dr Mah prefers to look at this protest as “a thing of the past”.

He says: “We should begin the journey afresh, although I do want to get everybody back into the fold.”

“I am very focussed on the campaign now. I will not be distracted by whatever.

“So far, we have been welcomed by every segment of society, as well as different racial and religious groups,” declares Dr Mah.

As an exco member of the Perak state assembly for two terms, this former state-assemblyman for Chenderiang laid his ground support long before the nomination.

He has the support of Perak Mentri Besar Datuk Seri Zambry Abdul Kadir and Tanjung Malim MCA division to contest in the parlimentary seat.

Last year, 19 out of Perak’s 24 MCA divisonal chiefs jointly petitioned for Dr Mah to be the candicate for Tanjung Malim.

Though acknowledging the Mahathir factor may have some impact on young Felda settlers, Dr Mah opines: “By and large, the first and second generations of Felda settlers are strong Barisan supporters.”

Indeed, Dr Mah has many other positives to inject optimism into the voters during his campaigns.

In addition to Proton City, the new plan laid out by the Barisan government for Tanjung Malim to turn it into a thriving region will be a good subject.

For example, there is a plan to turn Tanjung Malim into a regional auto-parts industrial hub with annual sales of RM12bil. Coupled with the Proton plant’s expansion, this will generate a total of 150,000 jobs within five years.

There is also the Youth City plan to draw more young people to Tanjung Malim.

But lurking behind is Chang of PKR, former human rights activist and state-assemblyman of Teja for two terms.

“Before I entered this race, I thought my winning chances were only 40%. But now, I rate my chances at 50-50, although it is still an uphill task to win,” says Chang.

Without a doubt, Mahathir’s poltical rally and the internal conflict of MCA are unexpected bonuses for this 38-year old former executive of Suaram.

But on his own, he has been working on the constituency quietly since 2016, after PKR signalled he might be the candidate for the Tanjung Malim parliament seat.

Chang reveals he has already done one round of visiting potential voters in the constituency, while the Opposition’s efforts to woo support from Orang Asli are seeing a positive response.

“I was pleasantly surprised when the Orang Ali community in Kampong Tisong requested for one bus from us to send them to the nomination centre as a show of support for us,” says Chang.

He is hoping to get 85% support from the Chinese community, who have openly voiced their support for the Opposition.

Generally, the concerns on the ground are similar to other parts of the country. These include GST, the rising cost of living and corruption in government.

While Felda settlers and small-holders are hit by low prices of palm oil and rubber, the Chinese fruits farmers in Bidor have given up hope on getting legal land titles.

But Chang points out that his chances to win can be frustrated by PAS’ presence.

PAS, which is not influential in the area but can still split the 40% Malay support for the Opposition, refused to withdraw from the contest when approached by PKR.

“PAS is not serious about this contest. It does not seem to have any intention to win. They are just a spoiler and will draw away some Malay support from me,” says Chang.

Mohd Tarmizi Ab Rahman, the PAS candidate in this three­-cornered fight, did not respond to a request for an interview.

As Chang is largely seen as an underdog in this contest, the betting among residents in Tanjung Malim is still for Dr Mah to win but with a reduced majority.