KUCHING: The eighth victim to die from the rabies outbreak in Sarawak is an 11-year-old boy from Kampung Sebangkoi Baru, Simunjan.

The state Health Department confirmed the victim succumbed to rabies encephalitis at 12.06pm Thursday (May 3).

This brings the total cases of rabies in Sarawak to nine since the outbreak began last June.

Of the nine, one survivor is a seven-year-old boy from Kampung Kuala in Serian.

He was discharged from the Sarawak General Hospital (SGH) on Jan 31, but remains in critical condition, requiring ventilator support at home.

"The latest victim, a primary school pupil in Simunjan, had shown signs and symptoms on April 18. He complained of pains and weak limbs on the right side of his body and was vomiting.

"The next day, his parents brought him to a private clinic and the case was immediately referred to the Serian Hospital on the same day, where the victim was diagnosed to have acute gastroenteritis (AGE)," said the Health Department in a statement by the state Natural Disaster Management Committee.

The victim suffered a seizure on April 22. With his condition worsening, he was referred to SGH the following day for further treatment.

A clinical sample was sent to a medical research institute in Kuala Lumpur on May 2, which was tested positive for rabies virus.

"The victim, based on a healed wound found on his body, is believed to have been exposed to a bite from a dog or other wild animal infected with rabies.

"The parents, when questioned, could not recall or confirm whether the victim had been bitten by a dog or other animals," the department said.

As of Wednesday (May 2), there were 30 areas in five divisions across Sarawak which have been declared as infected with rabies. 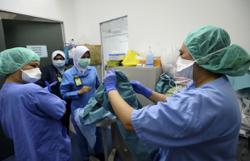