IPOH: More than half of Perak Barisan Nasional’s candidates vying for the 59 state seats are new faces.

As for the parliamentary seats, the coalition is sending fresh faces to 29% of the 24 seats available.

Almost one-third of the candidates vying for the state seats was from the “younger generation”, he said, adding that 17% of the parliamentary seat contenders fell in this category.

“The candidates include professionals, administrators, teachers and also grassroots leaders,” he said in his speech before announcing the candidate list yesterday. 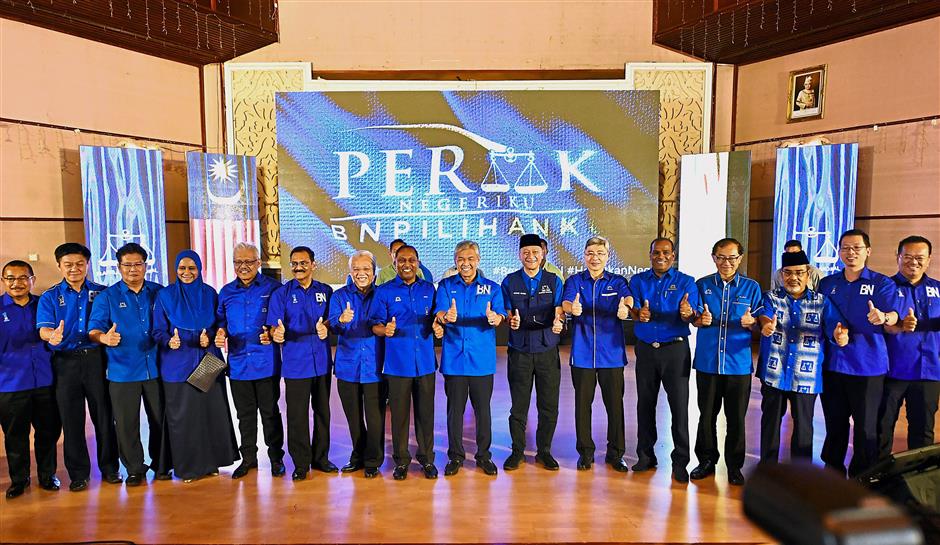 All set: Dr Ahmad Zahid and Dr Zambry (on Dr Ahmad Zahid’s right) posing with Perak Barisan candidates after the announcement at the Mentri Besar’s official residence in Ipoh. — Bernama

Abdul Puhat said he was delighted to be contesting in Parit Buntar as he was a local boy.

As a former district officer and the Kerian District Council president for a total of eight years, he said he was confident could provide the best for the people.

“I have been in the civil service for the past 37 years. With all my experience, I will be able to bring about the best for the people of Parit Buntar,” he said.

As for Jurij, a PhD holder who is the senior private secretary to Nazri, he was happy to be picked as a candidate under the constituency of his boss.

“I am hoping that the people there will give me their support,” he added.

Tronoh candidate Yuen, 30, said he hoped to bring development to his constituency.

“I have a lot of ideas in place to retain the younger generation in Batu Gajah,” he said.

Thangarani, a teacher, said the people of Buntong were familiar with her as she was a local there.

“Being a mother, teacher and politician, there is a lot that I can do for the people of Buntong.”

Li Kuan, 30, who is also Taiping Wanita MCA chief, said she hoped to change the perception of the town as a place for retirees, adding that there should be more job opportunities to attract youths to return home to work.

“As a local who was born and bred there, I want to see Taiping developed and youths getting more opportunities,” she said.