Under construction: The 11.7km-long Papar-Donggongan stretch of the Pan Borneo Highway, which is expected to be completed in 2023. — Bernama

FROM a sleepy fishing village in Sematan at the tip of Sarawak, cutting through the bustling city of Kuching and to the wilds and the dazzling beaches of Tawau in Sabah, the 2,325km Pan Borneo Highway straddles the two biggest states in Malaysia.

It is three times longer than the country’s current longest expressway – the North-South Expressway, which runs for 772km from Bukit Kayu Hitam in Kedah near the Malaysia-Thai border to Johor Baru.

Running along the coast of the two states, the Pan Borneo High­way is one of Malaysia’s biggest and most ambitious infrastructure projects to date.

Best of all, the four-lane, dual carriageway of JKR R5 standard – allowing speed of up to 100kph – is entirely toll-free.

The current trunk road is a two-lane single carriageway.

The idea for a single road to connect Sabah with Sarawak as well as Brunei originated as far back as the 1960s, when it was known as the Trans-Borneo Highway. By the 1970s, the state governments of Sabah and Sarawak, together with the Federal Govern­ment, Brunei and Kalimantan, Indonesia, developed a plan to build a highway along the coastline of the world’s third biggest island.

First announced as part of Barisan Nasional’s manifesto during the 13th General Election in 2013, construction works were officially launched by Prime Minister Datuk Seri Najib Tun Razak for the Sarawak portion in Bintulu in March 2015.

This was followed by the Sabah launch in 2016.

Estimated to cost RM29bil, the highway will be equipped with all the conveniences that come with modern expressways such as rest and service areas, lay-bys, pedestrian bridges and interchanges.

It will run some 1,089km from Telok Melano to Merapok, near the checkpoint with Brunei in Sarawak, before taking off again on a 1,236km trip in Sabah, which will be divided into three phases – Sindumin to Tawau, Tamparuli to Ranau, Kemanis to Keningau and finally ending in Tawau.

Originally, Telok Melano, a small fishing village close to the Indon­esian border with no proper roads – its nearest town is Sematan, which is only accessible by boat – was not included in the link.

However, a 32.7km road connecting Telok Melano to Sematan, costing RM580mil, was added to the project following a request by the late Sarawak chief minister Tan Sri Adenan Satem.

Like the North-South Express­way, which has brought many multiplier effects to Peninsular Malaysia, the Pan Borneo Highway is anticipated to bring about the same contributions and changes to Sabah and Sarawak upon its completion in 2023.

It is expected to result in an eight-fold multiplier effect to Sarawak’s economy, especially in the areas of tourism, infrastructure development and logistics.

The completion of the highway will certainly lead to a tourism boom in both Sabah and Sarawak as it will enable travellers to visit places which may have been difficult or too far to reach previously, benefiting local businesses such as homestays, short-term rentals, cottage industries catering to visitors and even Airbnbs.

Beyond tourism, the Pan Borneo Highway will act as the backbone of public transport in these two states, providing Sabahans and Sarawakians with safer and more comfortable travel, something which motorists in Peninsular Malaysia often take for granted.

This means a safer road network for 3.74 million people.

The ease of transport will also directly benefit transport businesses in terms of bringing much needed goods and services to hard-to-reach places.

An easier and safer road network will cut travelling time tremendously and improve productivity, inevitably lowering transportation costs – a key component in the costs of goods and services for rural folk.

As a comparison, it currently takes up to 19 hours to drive from Sematan to Miri and from there, up to 13 hours on the road to Kuching.

Besides the economic spin-offs, construction of the project is already generating some 400,000 jobs in the two states.

Furthermore, participating in the project has allowed local engineers and contractors the opportunity to upskill and gain experience

To ensure that locals get in on a share in the economic boost, the Government has promised guaranteed participation for Sabah and Sarawak bumiputra contractors in its construction with its Bumiputra Participation Programme.

A RM500mil financing facility has been set up to facilitate credit guarantees and financing for bumiputra companies undertaking sub-contract packages in the Pan Borneo Highway project.

On Dec 2 last year, Borneo Highway PDP Sdn Bhd managing director Shahelmey Yahya announced that all 35 packages under the first phase of the project would run in stages by the end of the first quarter this year. 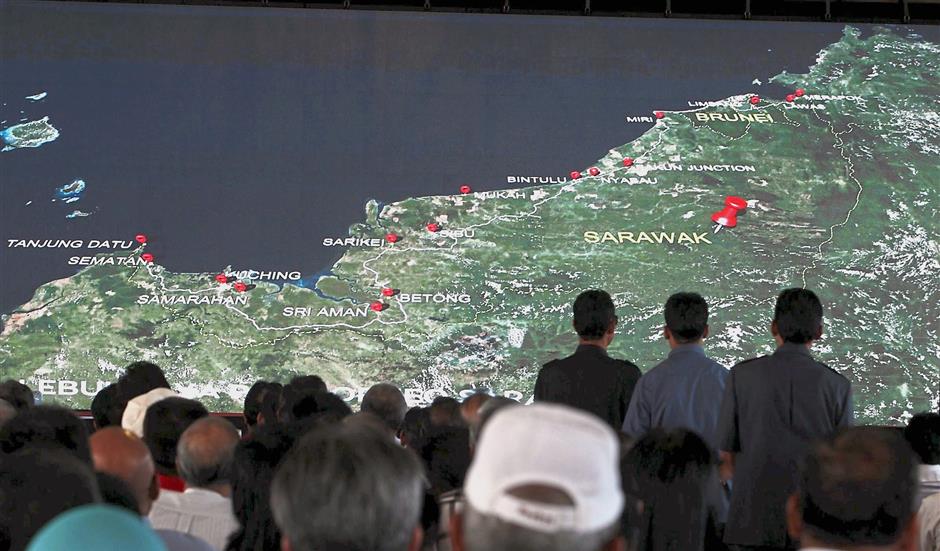 Ambitious project: A file photo of Sarawakians watching a video preview of the Pan Borneo Highway during its launching ceremony at Jalan Bintulu-Miri in March 2015.

As for Sarawak, Deputy Works Minister Datuk Rosnah Abdul Rashid Shirlin was reported as saying in Parliament on April 5 that as of March, its construction was 2% ahead of schedule.

In Sarawak, the 11 work packages under the first phase of the highway are being implemented, with the majority involving the upgrading of the federal road from two to four lanes, except the Telok Melano-Sematan route.

In Sabah, there are 35 work packages worth RM12.8bil for its stretch from Sindumin in Sipitang to Tawau, with seven packages implemented between April 2016 and last December.

The mega ring road highway is also set to ease access to oil and gas economic corridors, two sectors which are becoming increasingly important to Sabah and Sarawak.

Apart from easier access to oil and gas production centres in Miri, Sarawak, and Kimanis, Sabah, the highway will see to the development of upstream and exportation activities in surrounding areas and towns, as well as better infrastructure.

In Sarawak, for example, Works Minister Datuk Seri Fadillah Yusof had reportedly given the Govern­ment’s commitment to constructing a series of coastal feeder roads providing better access to the Sarawak Corridor of Renewable Energy (SCORE) growth areas and the highway.

Ultimately, however, the Pan Borneo Highway is more than just a road making its way across the heartland of Sabah and Sarawak and connecting the people in these two states.

It is a symbol in bridging the gap in development between Peninsular Malaysia and Sabah and Sarawak.