Ex-beauty queen adds a touch of glamour to polls

Rampas: She is believed to have been campaigning since April last year.

KOTA KINABALU: A former beauty queen is set to bring glamour to sleepy Kiulu where she may take on Barisan Nasional incumbent and ex-journalist Datuk Joniston Bangkuai.

She is also a former singer, model and a personal trainer who is touted to contest in the little-known sub-district tucked in the foothills of Mount Kinabalu.

The Parti Warisan Sabah candidate is expected to pose a real challenge to Bangkuai, from Parti Bersatu Sabah (PBS), who won with a razor-thin majority of 44 votes in GE13.

However, Rampas downplayed reports about her candidacy and pointed out any decision to field her in Kiulu lies in the hands of the party’s leadership.

“I still don’t know if I will be contesting against Datuk Joniston. But whoever it is I am going against, seasoned politician or not, my focus will be on winning the majority vote,” she said.

Warisan party sources confirmed Rampas was the likely choice for the seat, although former PKR candidate Rhodes Panilau, who is with Warisan now, was also being considered.

Born to an ethnic Kadazandusun mother from Kiulu and a British father, she has been going from kampung to kampung since April last year.

The Wirawati Warisan deputy chief comes from a family where politics is no stranger – her mother was involved in the now-defunct Parti Akar while her uncle Louis Rampas was the PBS assemblyman before Bangkuai took over.

Land and basic infrastructure are among the main issues being pushed by Warisan in Kiulu.

To his credit, former journalist Bangkuai successfully got the state government to declare Kiulu a sub-district, in addition to obtaining approvals for more roads and other basic amenities.

He has also raised the profile of the scenic district as an eco-tourism attraction.

Kiulu is a hilly constituency that consists of 105 villages spread over 388sq km.

The tough terrain is not only physical, but political too.

The state seat is likely to see contestants from local native-based parties Sabah STAR and Parti Cinta Sabah, with independents expected to join the fray. 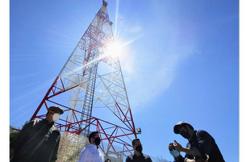