The Education Ministry is currently trying out a cashless payment system in a few residential schools.

“We need to test and see a few aspects first like how many cashless terminals will be needed because recess is only 30 minutes,

“We suggest this be tested in school co-operatives first,” he told reporters after launching the Thank You Teachers 2018 mass movement.

Mahdzir declined to name the companies or schools involved but said the companies were registered with Bank Negara and the Finance Ministry.

Mahdzir also said politicians on both sides of the divide should not get students involved in politics.

He said it was inappropriate for Penang Chief Minister Lim Guan Eng to sing and dance to a parody song mocking the Goods and Ser­vices Tax (GST) before a group of children.

Mahdzir was commenting on Lim’s actions when opening a free tuition centre at an apartment block in Mutiara Idaman, Jelutong, last Saturday.

“It is not a problem if they want to sing this song among DAP members but it shouldn’t be done at a tuition centre.

“There are students there,” he said.

Mahdzir stressed that education should remain free of politics.

On another matter, Mahdzir said the “Thank You Teachers” movement was meant to get the community, especially parents, more involved in school activities.

The campaign will run until Teachers Day on May 16.

Mahdzir also announced that this year’s Teachers Day theme is “Teachers are the drivers of education transformation”.

Education transformation, he added, did not mean an overhaul of the current system but rather improving what already exists.

For example, he said teachers could conduct innovative classroom activities.

The national-level celebrations will be held at the Putrajaya International Convention Centre on May 16. 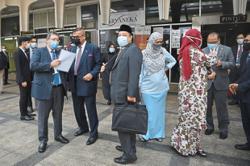