KUALA LUMPUR: A local "Macau Scam" syndicate has been crippled by the police.
City police chief Comm Datuk Seri Mazlan Lazim said in a press conference on Tuesday (Feb 20) that 14 members of the group were arrested in raids by police.
"All of the suspects were found to be locals. One of the suspects was also found to have an expertise in IT. Another of the suspects was also wanted by the police for a murder case in Sungai Dua (Penang)," he said.
Comm Mazlan added that a police report lodged by a victim on March 13 eventually led to the arrests.
He added that the scammers would pretend to be bank officials and police officers to dupe the victims into thinking that their bank accounts would be frozen for various reasons.
"The police also seized a script book that was used by the scammers which had answers for general questions asked by the victims," he said.
Comm Mazlan also said that the initial investigation has led the police to believe that the group had been operating for about a year.
As of now, 44 cases have been tied to the group, with victims' losses estimated at about RM3 million.
Article type: metered
User Type: anonymous web
User Status:
Campaign ID: 46
Cxense type: free
User access status: 3 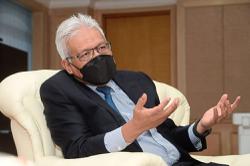