You ‘wooden’ miss it: Datuk Dr Mohd Hizamri (left) together with a special forestry team inspecting the wood worth RM3mil at an illegal logging site. — Bernama

According to Bernama, the raid was carried out on Saturday by 60 State Forestry Department personnel following information from the public.

The personnel came across nine heaps of logs around the forest reserve.

“Initial investigation revealed the group started operations in early February based on the tree stumps and latex left behind.

“Subsequently, the department detained four local men who were transporting the split wood out,” he told reporters after inspecting the location here.

The men, aged between 20 and 60, were all released later on police bail after their statements were taken to assist investigation for possession of forest products.

He said the men appeared to be professional.

At the same time, he said, the department would utilise the RM1mil allocated by the Government to buy drones and new vehicles to monitor illegal logging.

“We will also continue to use the forest monitoring using remote sensing (FMRS Plus) system developed by the Peninsular Malaysia Forestry headquarters to see the extent of the damage caused,” he added. 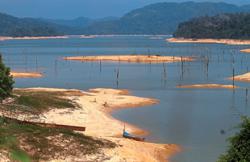 Man arrested for setting fire at forest reserve in Kedah