IN the 2013 general election, around 2.6 million new voters made a record turnout of over 84%, swaying the popular vote and leading to unexpected results in various constituencies.Since then, however, the number of new voters barely reached two million, with over 3.7 million eligible voters yet to register.

The Election Commission said that the largest group not putting their name on the election roll is those aged between 21 and 30. According to a survey on 604 Malaysians from this age cohort by Merdeka Centre and Watan – a non-partisan NGO which campaigns for youths to register and vote – the reasons they gave for their passivity are: “Busy, no time to register” and “Voting does not make any difference”. Around 70% in the nationwide study last August also said they are not interested in politics while 75% found politics to be confusing.

Some might say this is expected of the “me generation” but this apathy is a shift from the political awakening that seemed to have taken hold in the last two elections when young voters were a force to reckon with. And it is going against the tide that is sweeping the world where the young are standing up to be counted, even stepping up to take office.

They are ‘woke’, says Watan publicity coordinator Liyana Yusof, but that awareness is not in politics.

And this is due to a lack of space given to young people to learn about politics or get involved in politics, she claims.

It doesn’t help that there are repercussions for anyone who tries to be ‘political’, she adds.

“We have seen many young people suspended from university or dragged to court for making a stand, for dissenting and resisting. So it is hard to keep that political interest going when you are told from all sides to cut it out, it’s dangerous or bad.

Liyana acknowledges that there is a growing interest among the youth about their rights but it does not translate into political participation.

“Many are channelling that into social enterprises, environmental activism, helping the homeless and others.

“We are seeing a wave of political activism among the young in the West, especially in the entertainment scene where many 20-something stars are taking a political stand and expressing their opinions. I think that is seeping here but it is not enough. Liyana: ‘Young people are not being consulted or involved in the policy-making process’.

“I don’t think we ‘politicise’ our lives enough. We don’t see how the decisions we make every day are political or how our commercial choices are political.”

One reason, she says, is because many do not realise that they have a role to play in the political decisions that affect their lives.

“We see a chunk of power at the top, but we don’t see how we can be a part of that. We don’t understand the forces that make us feel powerless and we don’t feel that we are a part of the change. We need to reframe the young’s understanding of politics.”

Watan executive director Masjaliza Hamzah points to political education as the answer. This has to start from primary school.

“Ongoing political education is needed to show how politics and policies are connected and how they affect our lives. We can have different modules and activities at the different levels in school on how the political system works as well as instil in them the importance of voting.”

One strategy is to hold elections at schools such as the prefects’ board and club committees.

“By participating in this democracy game, they can understand the process. So by the time they hit the voting age, they will already know why they should register and why it is important.”

Liyana agrees that democracy and voting should be seeded early in education but it should be neutral.

“This is so that the young people can see that it does not matter what their opinion is about certain policies – they can be critical without taking sides – and perhaps feel empowered to take up a political leadership role.

She says the young are exposed to voting but the concept unfortunately is not pegged to democracy.

“We don’t understand the political system or process. If we are not given the awareness, we will be voting like we do for American Idol and Akademi Fantasia – we will vote only for those we like the most.

Masjaliza says the EC plays a key role in raising youngsters’ awareness on the importance of voting: “The EC has the structure and network to do it.”

They will have more resources and time to focus on it effectively if the voter registration is made automatic, she notes. “In some countries, the registration to vote is automatic – their election commissions focus more on raising voters’ awareness and getting them out to vote.”

It has been proposed to the EC in the past to automatically register voters as soon as they reach 21 years old but the commission said Malaysia was not ready for this yet.

“But with digital technology, Malaysia is ready. We use our MyKad for everything now and it should be easy for voters to ensure their data in the system is updated.

“This is not forcing citizens to vote. It is just to ensure their names are already in the electoral roll, should they want to do their duty and vote,” says Masjaliza.

Political parties also need to work on building the capabilities of their young members as well as tapping into new talents, she adds.

“They need exposure to the political system and see how to run the community and country.

Liyana says the young want their voices to be taken seriously.

“How many politicians have consulted youth for policy? There are a lot of groups of active young people out there, but they are not being consulted or involved in the policy-making and decision-making process.”

“The young actually have a lot of power, even if they may not realise it. They are very good at being consumers and becoming influencers and mobilisers on the consumer side of things. They can shut down a business overnight if they decide to; they make and break celebrities all the time.”

“Give us the knowledge and space, so that we know what our vote means and we can be responsible citizens.”

Still a ‘yes’ to voting 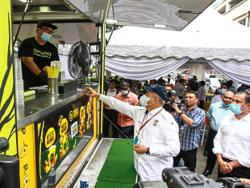