SEREMBAN: Nor Afini Roslan, the Form Two student killed in a freak accident involving a lawnmower, was a keen archer who had only just moved to Gemas from Pahang with her father-cum-coach before the new school term began last month.

Nor Afini, 14, was on the SMK Tuanku Abdul Rahman field preparing for Sports Day when a broken blade from the ride-on lawnmower sliced open part of her skull at 10.30am yesterday.

She was with a group of about 50 students at the time.

Nor Afini was killed instantly while two other students – her classmate Abdullah Hazlan and Form One student Mohd Farhan Reza Badrol Hesam – were injured and taken to the Gemas health clinic for treatment.

Her aunt Norrizah Samat, 53, a teacher at a primary school in Gemas, questioned how the lawnmower was allowed to operate on the field while students were present.

Norizzah said she was in class when she got a call from her older brother Roslan Samat, 55, Nor Afini’s father. She rushed to her nephew’s class and broke the news to him.

When met at home in Felda Sg Kelamah, Muhammad Addim, 10, said he was very close to Nor Afini, who always helped him with his homework.

“She was the one I used to play with and fight with most of the time.

“I don’t know who will manja (pamper) me from now on,” said Muhammad Addim, the youngest of the five siblings. 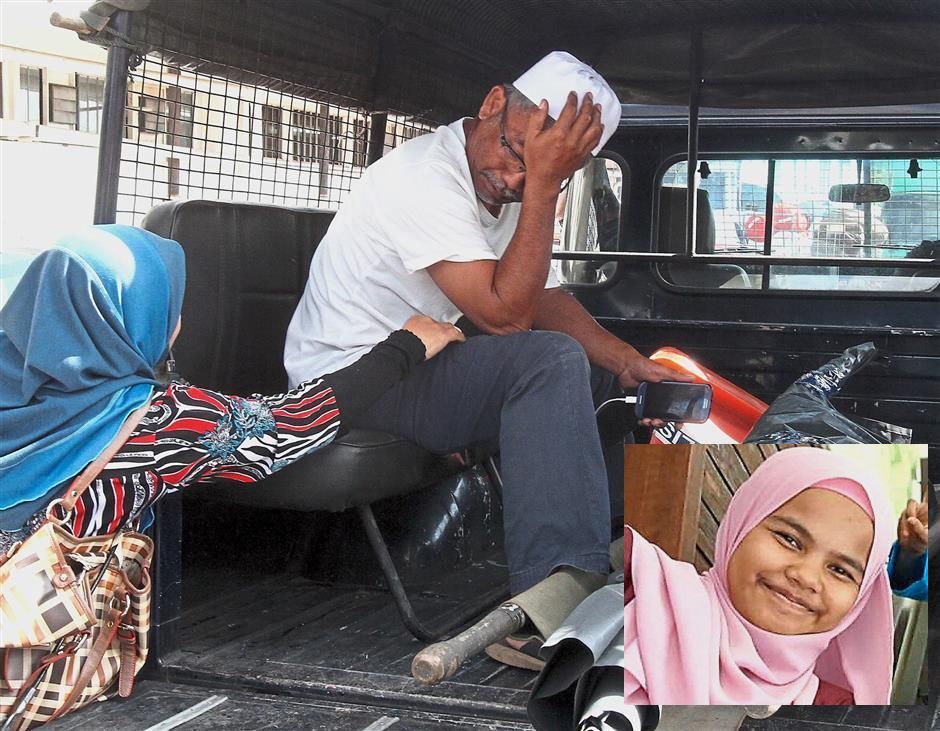 Horrific tragedy: Roslan being consoled by a relative as his daughter’s remains were brought to the Tuanku Ja’afar Hospital for a post-mortem. (Inset) Nor Afini.

One of Nor Afini's schoolmates, who declined to be identified, said the lawnmower operator was cutting the grass a short distance from where the students had gathered.

“All of a sudden, we heard screams. Nor Afini collapsed and we were shocked to see how bad her injury was,” she said.

Another of Nor Afini’s aunts, who chose to remain anonymous, said at the Tuanku Ja’afar Hospital (TJH) mortuary here that the girl had re­presented Pahang in archery.

She said Nor Afini was so passio­nate about the sport that she decided to follow her father when he moved to Gemas to work on the family’s oil palm plot.

“My brother trained Nor Afini and her three older siblings in archery and they all went on to represent Pahang in the sport.

“In fact, Muhammad Addim, who is in Year Four, has also taken up the sport,” she said.

Nor Afini’s body was initially taken to Tampin Hospital for a post-mortem but police then decided to conduct it at TJH.

Roslan, who accompanied his daughter's body to TJH in a police Land Rover, burst into tears as photographers and television crews rushed towards the vehicle.

Seated alone at the back, Roslan had to be helped out by relatives.

“We are still investigating and hope to remand him tomorrow,” he said, adding that the case is being investigated under Section 304 of the Penal Code for manslaughter.

Dept to probe if SOP was carried out by contractor