300 pay their last respects to teen killed by falling chair

KUALA LUMPUR: Some 300 people, including friends, schoolmates and re­­latives, crowded the narrow corridor of the Seri Pantai People’s Housing Project to attend the funeral of S. Sathiswaran, who died after a chair hit him.

The 15-year-old died after being struck by an office chair, believed to have been hurled from the upper floor of his family’s flat in Pantai Dalam.

During the funeral, which started at around 10am at the family’s unit on the 16th floor, some had turned up crying and wailing.

Among the crowd was the victim’s mother, S. Kasthuri Bai, 45, who looked inconsolable as Sathiswaran’s body was taken away in a hearse.

Friends and relatives of the SMK La Salle schoolboy looked on as the final rites were performed. 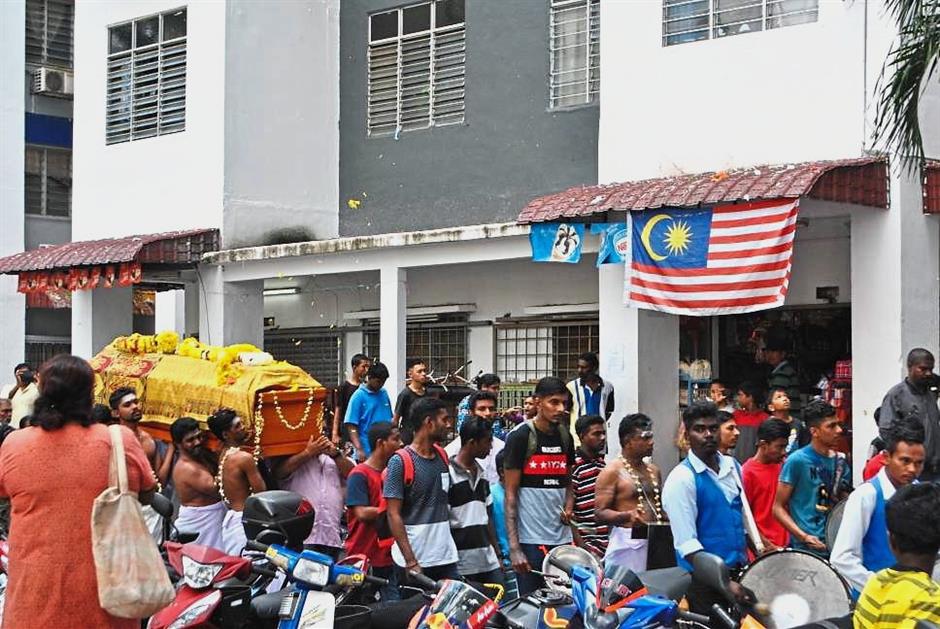 Final journey: The funeral of Sathiswaran whose body was laid to rest at MBPJ Damansara Hindu Cemetery?.

At 2.20pm, the boy’s body was taken away in a coffin borne by his friends and family members, to be laid to rest at the MBPJ Damansara Hindu Cemetery at about 4pm.

One of the residents who turned up at the funeral said the management needed to do something about the hazards at the flats.

“There is junk everywhere. People just leave trash and discarded furniture around.

“We pay RM48 monthly for maintenance but things like the elevators break down regularly and old people like me are forced to use the stairs,” said the man who only wished to be known as Ganesan. Ganesan is in his 60s.

“I don’t want this to happen to anyone or their brother. Something needs to be done to make sure this does not recur,” he said.