Give me the honey!

Best of the best: A study between Tualang honey, other types of local honey and Manuka honey found higher phenolic acids and flavonoids content in Tualang honey.

Dr Hanis Mastura Yahya, a senior lecturer and nutritionist from Universiti Kebangsaan Malaysia, said 95% of honey’s dry weight is composed of carbohydrates (mainly in the forms of fructose and glucose), which are easily absorbed by the human body.

According to her, honey contains at least 181 substances that include small amounts of vitamins such as ascorbic acid, niacin, riboflavin; minerals such as calcium potassium, phosphorus, sodium; as well as proteins and phytochemicals such as phenolic, flavonoids and carotenoids.

Dr Hanis, who is also a Council Member of the Nutrition Society of Malaysia, added that the consumption of different honey varieties will have differing effects on one’s blood glucose level.

“The Glycaemic Index (GI) of honey ranges from 32 to 87. A lower value of GI is associated with higher fructose-glucose ratio,” she said, adding that fructose is believed to be able to prevent a spike in one’s blood glucose level.

According to her, foods with low GI and high fructose-glucose ratio will induce only a small increase in blood glucose level. 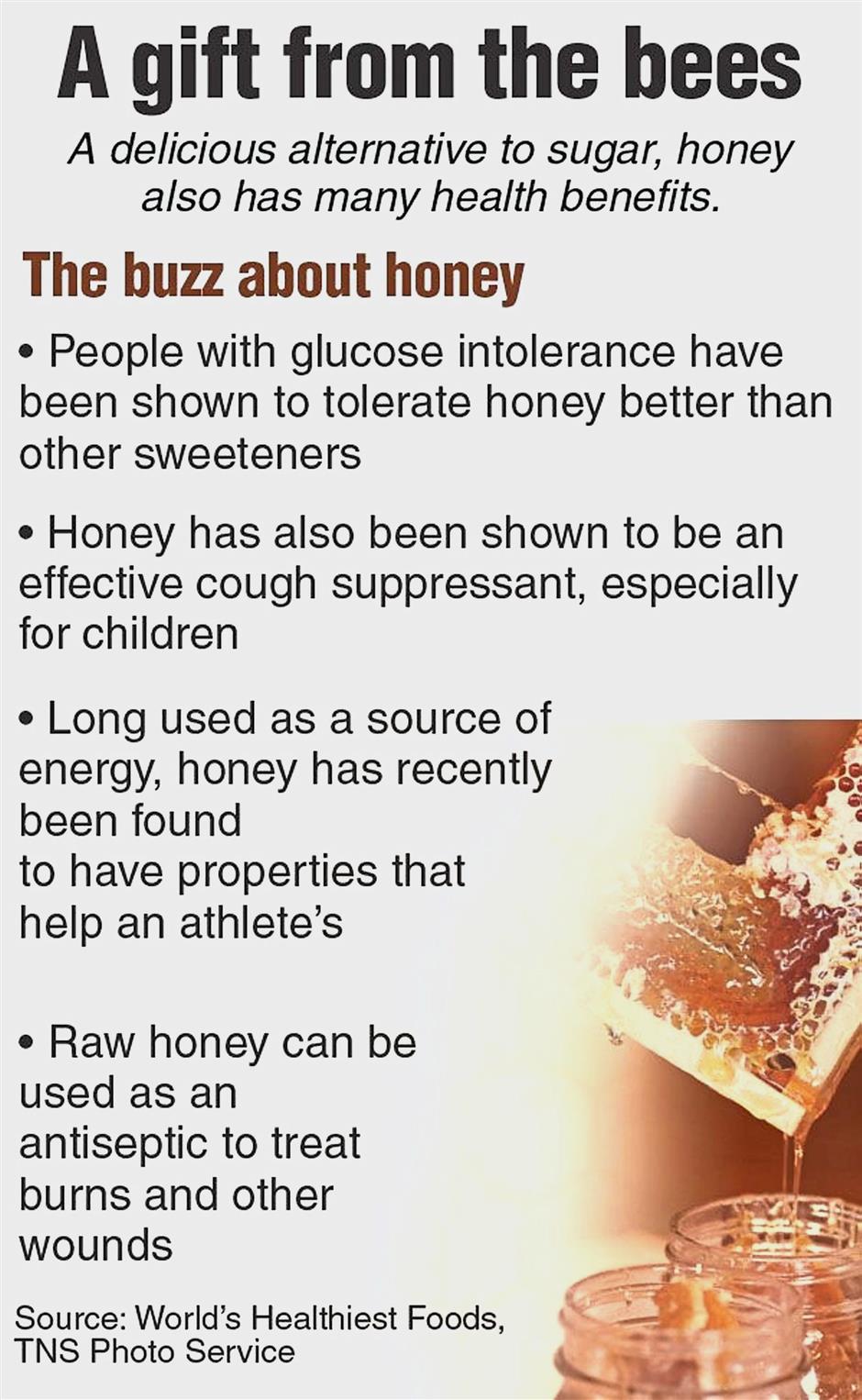 “Although results from several studies reported that honey consumption by diabetic patients can cause short-term hyperglycemia, the increment in blood glucose level is significantly lower compared to the intake of other types of sugar.”

She added that some studies reported that consumption of honey will result in a reduction in several lipid parameters such as total cholesterol and low density lipoprotein cholesterol.

According to her, eating honey will also increase high-density lipoprotein cholesterol level among healthy individuals or patients with hyperlipidemia (which is essentially high cholestrol levels).

Studies in various forms of cancer cells and tumours have also shown that honey is suggested to have antimetastatic, antiproliferative and anticancer effects.

Ingesting honey is not the only way of squeezing the benefits from the food substance.

Dr Hanis explained that there are medicinal benefits to be derived from the application of honey on wounds.

She added that honey is also effective for treating stomatitis or sore mouth as it has the ability to penetrate quickly into the tissues.

She also explained that the acidity of honey inhibits the growth of pathogenic bacteria, and that its antibacterial property is due to a high sugar and low moisture content.

“Honey possesses antibacterial property due to characteristics such as high osmolarity and low pH level.

“For example, in a clinical trial, the recovery period for gastroenteritis was reduced after honey was used as a replacement for oral rehydration solutions,” she said.

Dr Hanis said there are differences in the antibacterial properties depending on the type of honey.

“Honey produced from Manuka plant is native to New Zealand and is associated with having positive effects against bacteria.

“Manuka honey is labelled with a unique Manuka factor trademark as a grading system, and its value refers to the unique content of leptosperin, dihydroxyacetone and methylglyoxal, which reflect the antibacterial properties of the honey product,” she said.

She shared that tualang honey, which is found in the north-western region of peninsular Malaysia, is suggested to be as effective as Manuka honey.

“Tualang honey is a jungle honey produced by rock bees which build their hives at the branches of the Tualang tree.

“A study between Tualang honey, other types of local honey and Manuka honey found higher phenolic acids and flavonoids content in Tualang honey compared to the others,” she said.

She said the variety of honey is influenced by geography, botanical source, season, harvesting, processing and storage.

“Honey varieties can be differentiated by the shade of their colours, in which lighter colour indicates milder taste.

“The botanical origin will determine the aroma, taste and colour of the honey,” she said, adding that honey can be found in the forms of liquid, comb, crystallised or whipped.

She said honey can be incorporated into food preparation such as in cakes, muffins, smoothies, overnight oats, salad dressing, chicken marination and in tea.

“A tablespoon of honey can supply 64 kilocalories and its intake in the daily diet should be counted as part of the carbohydrate allowance.

“Due to the high fructose content, honey is 25% sweeter than regular table sugar. Thus, the amount of honey consumed must be smaller than normal sugar,” she said, adding that carbohydrates should contribute only 10-20% of total daily energy intake for diabetic patients.

According to her, there are guidelines for the proper consumption and storage of honey, although it has many health benefits.

“Honey should not be given to children under the age of 12 months because of the risk of botulism.

“This illness is associated with food contamination from spore production, and honey is one of the potential sources of the disease-causing spores.

“Although honey has low moisture content, it should not be left uncovered as this can lead to fermentation and spoilage,” she said.

She added that it is advisable to clean one’s teeth after eating honey, just as is the case with normal sugar.

However, she dispelled the myth that the acidity of honey would corrode a metal spoon used to eat it.

“The metal spoon will not corrode in the few seconds it is used to scoop the honey. The corrosive effect can be considered as negligible.

“However, plastic, ceramic or wooden spoons can be used as alternatives to scoop honey,” she said.