KLANG: The late industrialist and philanthropist Tan Sri Yeoh Tiong Lay loved Hin Hua High School, which he co-founded in 1947, so much so that he was worried about its future.

So just months after his demise in October, his widow, Puan Sri Tan Kai Yong, presented a RM30mil cheque to the school to be parked under a charity fund named after her late husband and herself.

“In his last few years, he had been worried about how the school would fund its future development.

“It was his plan to announce the setting-up of the Hin Hua development named after Tiong Lay and me on his 90th birthday in December 2018, but life failed him,” said Tan in her speech during the cheque presentation ceremony yesterday. 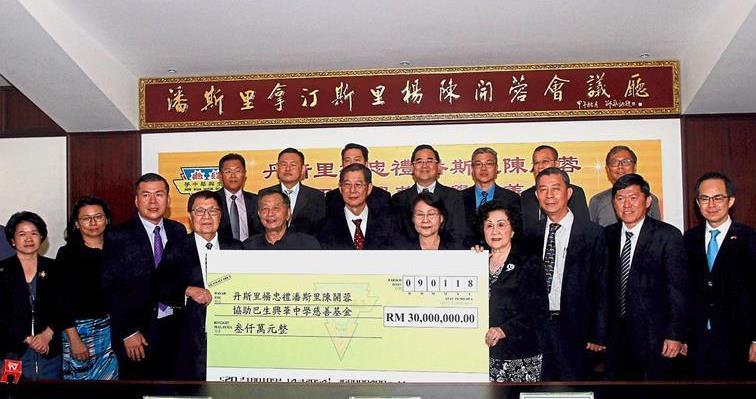 Tan, who is a director of the school and a former school teacher, said Yeoh, who was the chairman of the school board, had been very proud of the students’ achievements as well as the teachers’ contributions over the years.

“With our children’s understanding and support of our wish to contribute to the school, we decided to officially announce the setting-up of the fund today,” she said.

The funds will go towards the sustainable development of the school, the English language ­teacher development centre, student bursary, the teachers and staff welfare fund, the school’s alumni association and Parent-Teacher Associa­tion.

Under the conditions attached to the contribution, the RM30mil must remain in the bank untouched with only the interest it generates used for the six core areas.