KUANTAN: The improved management of floods shows the Government’s sensitivity to the plight of flood victims who need assistance to cope with the disaster, says Datuk Seri Najib Tun Razak.

In praising efforts taken to help flood victims in affected states, the Prime Minister said it was smooth and better organised but hoped that improvements would continue to be made.

“I would like to thank all parties involved, especially Datuk Seri Dr Shahidan Kassim as the minister responsible for coordinating the aid for flood relief centres.

“We are grateful that the flood situation in Peninsular Malaysia has improved, with many of the relief centres closed. The rest of the flood victims will be able to return home soon,” Najib said after spending almost an hour visiting many of the 62 flood victims at the Sri Damai Community hall here.

Earlier in Pekan, a Year Two pupil of SK Paloh Hinai became the centre of attention when he was called on stage at a convention hall to receive school aid from Najib.

Najib, who is Pekan MP, spent some time chatting with the eight-year-old boy and his mother Siti Norfaizah Sh Harun, 40, at the event. 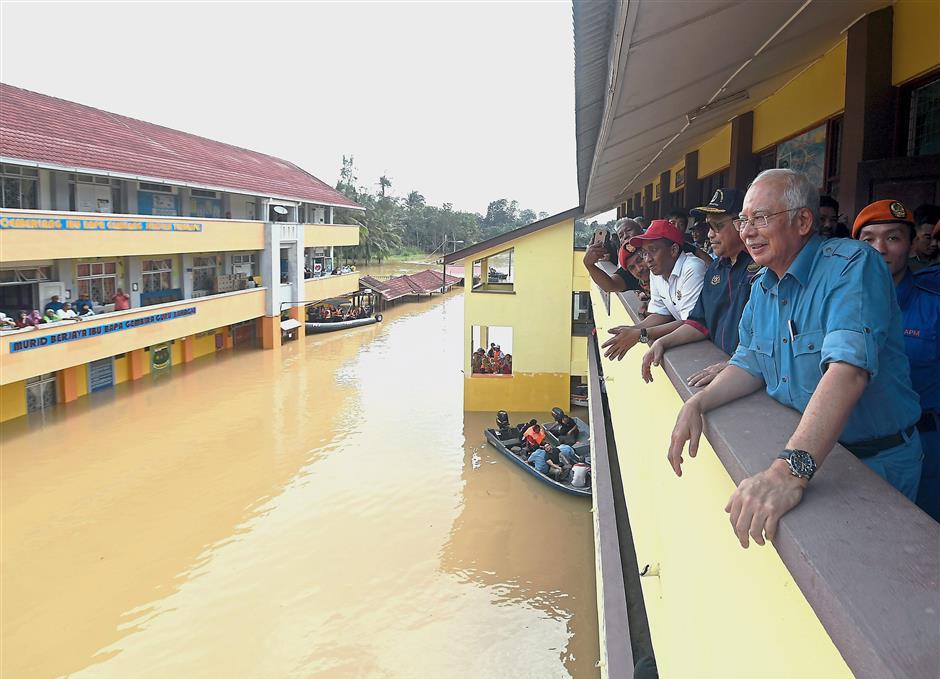 The boy, from Taman Selasih, Paloh Hinai, was elated when asked how he felt about receiving the uniform, school bag and shoes from the Prime Minister.

According to Siti Norfaizah, her son was given that name because her husband, Jefree Wahab, 49, was proud of Najib’s leadership and wanted to honour him.

“Actually, I did not even know he had named our son, Mohd Najib Razak, until about three weeks after I had delivered him.

“I was surprised but happy, and hope that he will grow up to be someone useful to the country,” she said.

Siti Norfaizah said his friends often teased him about his name.

“They would sometimes ask him about government issues, and he would come home to find out from us what is the meaning of BR1M and other matters.

“But he is really not bothered by the teasing,” she said, adding that the mocking went a notch higher when one of his schoolmates goes by the name of “Rosmah”.