KOTA KINABALU: The fury of Typhoon Tembin, which wreaked havoc in southern Philippines, was such that three decomposed bodies and four survivors were swept to parts of Sabah.

Sources said the naked bodies of a man and two women that were washed ashore in Pulau Banggi near Kudat are likely to be victims of the deadly typhoon that appeared on Dec 23.

They are believed to be victims of a capsized boat in waters off Pulau Mangsee in southern Philippines.

Their remains were discovered at Tanjung Malawali in Sabah’s northern island of Banggi at about 10.30am on Friday.

However, Sabah police commissioner Datuk Ramli Din declined to say much except to indicate that investigations were underway.

So far, no Malaysians in Pulau Banggi have reported about missing relatives. Police also do not suspect foul play as there were no injuries on the bodies.

Philippine authorities had stated that more than 20 small boats and fishing trawlers were hit in Mangsee during the Dec 23 typhoon that left some 200 people dead and more than 70,000 displaced.

About noon on Friday, Malaysian soldiers on the forward bases in Sandakan waters rescued four Filipino fishermen who had been adrift for six days after their trawler with 16 people capsized in Mangsee waters during the typhoon. 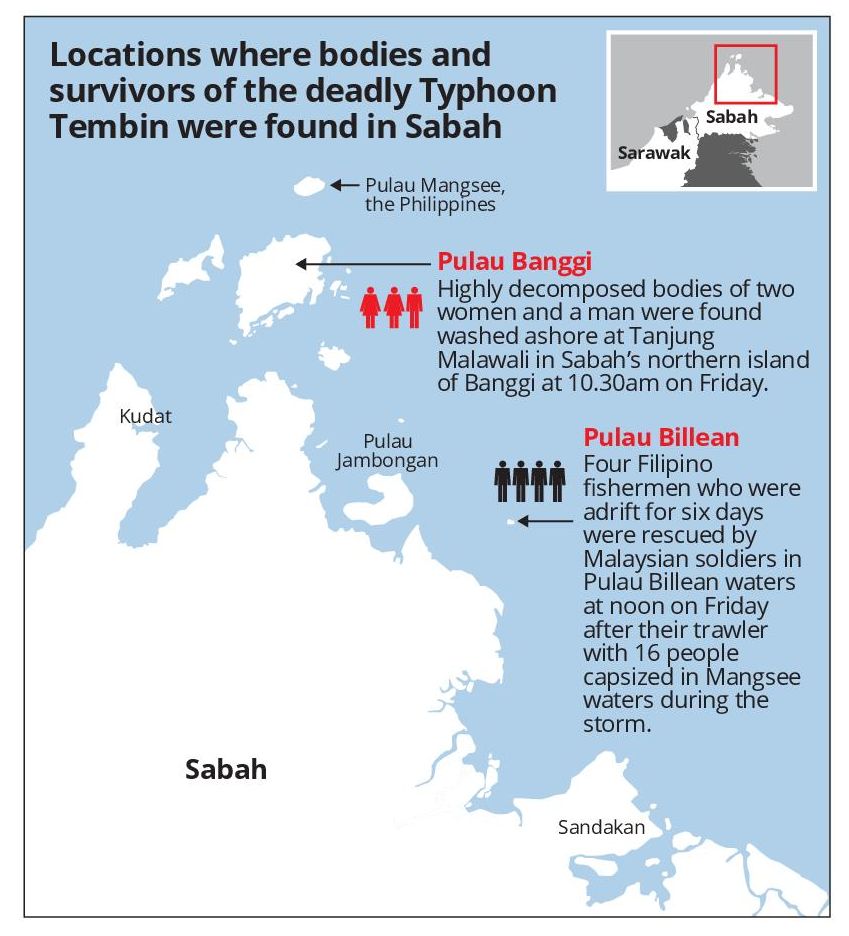 They had miraculously survived six days at sea, clinging on to wood debris from their trawler.

The fate of the remaining 12 is unknown.

The four, who suffered sunburn and dehydration, were given treatment after they were picked out of sea in Pulau Billean waters by Malaysian soldiers who handed them to Filipino officials at the sea border yesterday.

Angkatan Tugas Bersama 2 Commander Brig-Gen Zarondin Md Amin said in a statement that the four were saved near Pulau Billean, about 60 nautical miles from Mangsee waters.

It could not be immediately ascertained whether the three bodies found earlier were from that same fishing trawler of the survivors.

The Philippine Daily Inquirer placed the death toll from Typhoon Tembin on the remote island village of Mangsee at 32 with at least 59 others missing.

The report quoted vice-governor Victorino Socrates as saying that search-and-rescue operations were continuing in the waters off Mangsee.

Many houses and other structures on the island, home to more than 8,000 people, were either damaged or destroyed.