No one was injured in the fire which started at 9.30am yesterday, said Kuala Lumpur Fire and Rescue Department operations management chief Ahmad Adli Abdul Rahman.

An eye-witness, Mohd Syawal Indra, 28, said: “I heard people screaming for help and quickly went to help put out the fire. We were successful in almost extinguishing the blaze at one point but gas cylinder explosions caused the fire to spread,” he said. 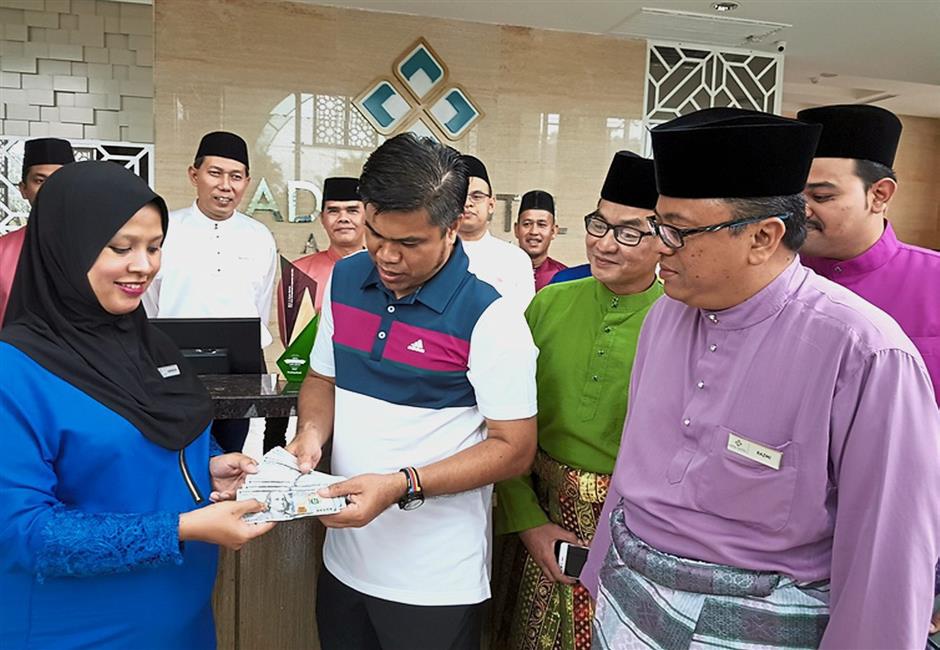 LANGKAWI: Despite earning her living as a housekeeping employee and her husband having to take two jobs to make ends meet, Siti Nuraminira Abd Rahman is not easily blinded by money.

In fact, the 33-year-old housekeeper at the Langkawi Adya Hotel displayed her true honesty when she handed over US$5,000 (approximately RM20,295) in cash that she found in a hotel room last Wednesday, to the hotel management.

Siti Nuraminira, who is seven months pregnant, said she discovered the money while cleaning up a room which was previously occupied by a Pakistani tourist and his family.

“I found an envelope as I lifted the bed sheets in the baby cot. Upon checking, I found there were foreign currency notes in it,” she told reporters yesterday. -Bernama 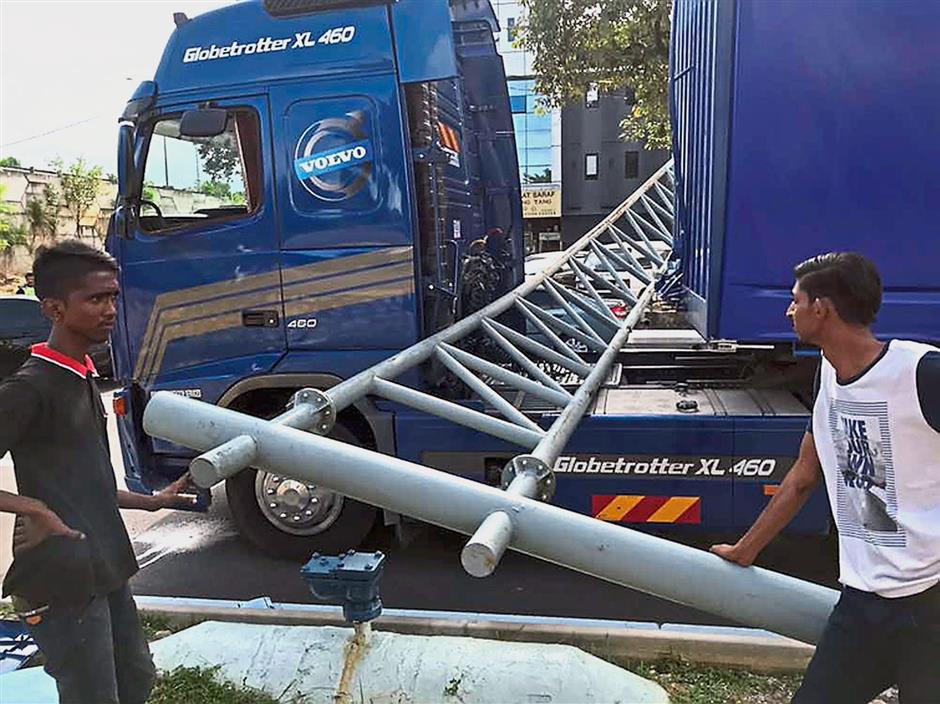 Johor Jaya Fire and Rescue Department operation commander Anuar Amdzah said the department received a distress call at around 10.31am yesterday. Firemen received help from the police to cut steel parts and the rescue operation ended at around 11.15am, he said in a statement. The lorry driver was unhurt. Meanwhile, Seri Alam OCPD Supt Jokhiri Abd Aziz said the police have yet to receive a report from the lorry driver. GEORGE TOWN: New police recruits will have to undergo hair sample tests to ensure that they are not drug abusers.

He said the police force is taking seriously the issue of misuse of drugs among the policemen.

“The new mechanism could trace if a person had taken drugs even during his or her younger days. The test could also determine what type of drugs they took,” he said after the handing over of duties ceremony between outgoing Penang police chief Comm Datuk Wira Chuah Ghee Lye and new state police chief Comm Datuk A. Thaiveegan yesterday. 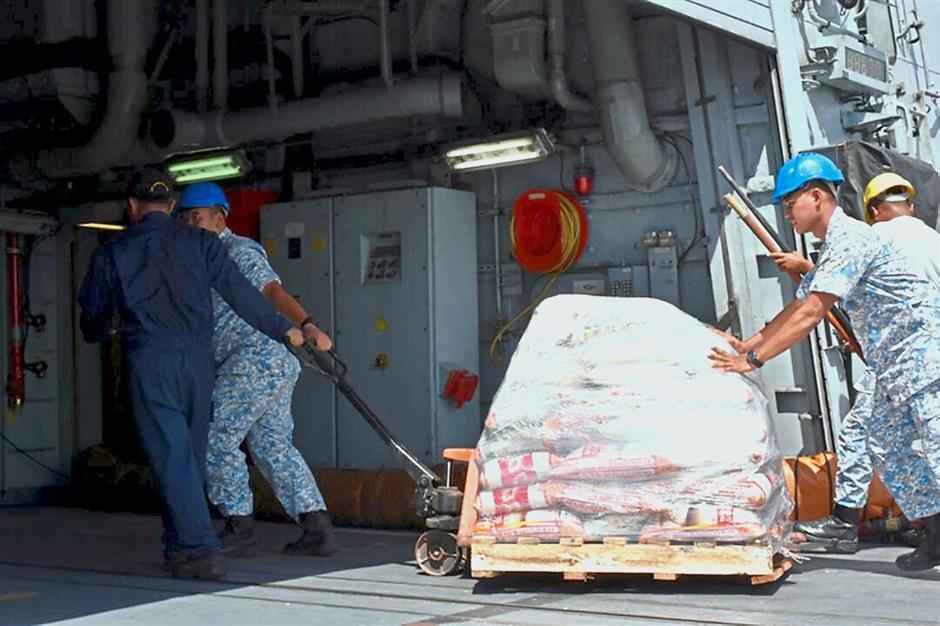 KOTA KINABALU: A Malaysian navy vessel KD Kedah loaded with 45 tonnes of food, clothes and medicine left Sandakan for southern Philippines on a humanitarian mission to provide aid to victims of Typhoon Tembin.

The aid would be distributed to typhoon victims hit by floods and landslips in the towns of Tubod and Piagapo in the Lanao district in the Mindanao region.

KD Kedah is expected to reach Zamboanga City port today and will work with their Philippines counterparts in distributing the aid, a statement from the navy said.

Some 182 people were killed and over 70,000 people displaced as typhoon Tembin hit Mindanao area on Dec 23.

“It is good if developers can obtain more details from the Urban Wellbeing, Housing and Local Government Ministry if there is an oversupply of such properties, especially studio and service apartments.

“There are 130,000 units of oversupplied properties as of the first quarter of 2017,” said Johari at the launch of the new version of the e-procurement (ePerolehan) system.

His comments came after the Government issued a directive last month to temporarily freeze approvals to build commercial premises, condominiums and service apartments that are priced RM1mil and above.

The directive was made after Bank Negara reported that there was a glut of high-end properties in the market, of which many were unsold. KUALA LUMPUR: Police crippled a drug syndicate after seizing various drugs worth RM1.7mil, including ecstasy mixed with drink powder packed in sachets for “sale” to revellers at entertainment outlets.

Federal Narcotic Crime Investi­gation Department director Comm Datuk Seri Mohmad Salleh said police also arrested three suspects aged between 29 and 56 who were believed to be involved in the syndicate during four raids in Selangor and Kuala Lumpur on Wednesday and seized two cars.

He added that police seized a to­tal of 13kg of ketamine, 2,160 drink sachets believed to be mixed with ecstasy weighing a total of 19.44kg and 12.94kg of precursor ephedrine, believed to be used to make methamphetamine and amphetamine.

KOTA BARU: Fourteen huts which served as hostels for students at the Madrasah Muhammadiah religious school in Beta Hilir near here were destroyed in a fire on Thursday night.

Kelantan Fire and Rescue Department director Nazili Mahmood said there were, however, no occupants in the wooden huts, when the fire broke out at about 7.50pm.

“They (occupants) were all at the surau of the madrasah when the fire broke out,” he said.

Nazili said three engines with 21 firemen rushed to the scene and managed to douse the flame by about 9pm. -Bernama

GEORGE TOWN: A 50-year-old hairstylist has been remanded for four days in connection with a molestation case involving a male foreign national.

“The victim claimed that the man groped his private parts,” he said, adding that the suspect tested negative for drugs.