The Foreign Ministry said in a statement yesterday that the award would be conferred at the Shaikh Hamad Palace during Najib’s three-day official visit to Bahrain, which starts today.

“The award is the highest conferred by Bahrain,” the ministry said.

“Later in the afternoon, the Prime Minister and his wife will attend Bahrain’s National Day Ceremony at Sakhir Palace in the presence of King Hamad,” it said.

Wisma Putra said the visit would strengthen the friendly ties between the two countries.

It added that total trade between Malaysia and Bahrain from January to September this year stood at RM805.73mil.

Total exports for the same period were RM389.1mil, while imports amounted to RM416.63mil. — Bernama 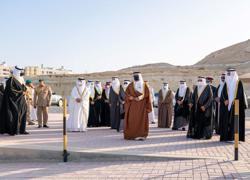