SHAH ALAM: The pressure on Datuk Zaid Ibrahim and Tun Dr Mahathir Mohamad to issue a public apology to Sultan Sharafuddin Idris Shah and the Bugis community is growing, with thousands of people staging a rally here.

The protesters, from diverse racial and religious backgrounds, gathered at the Dataran Mayang in Section 16 here from 9.30am to express their loyalty and support for the Ruler.

Tan Sri Noh Omar, the advisor behind the “Daulat Tuanku” rally, said the two politicians should be banned from Selangor if they failed to apologise.

“Zaid from DAP has insulted and challenged the royal institution with his rude and disrespectful remarks against the Ruler on Twitter and Facebook.

“Dr Mahathir insulted the Bugis community by comparing them with pirates in his speech at a rally on Oct 14.

“Their statements were outright rude, hurt the feelings and insulted the Selangor people; and also angered the Sultan.

“We call upon all Selangor citizens to stand strong and united behind any action by the Sultan against them (the two),” he said at the rally.

Donning red T-shirts in a display of solidarity, many of them were holding placards with slogans such as ‘’Do not humiliate our Sultan!”, “Zaid Ibrahim get out of Selangor” and “Zaid and Tun Mahathir traitors of religion and race”, and wearing the Daulat Tuanku headband. 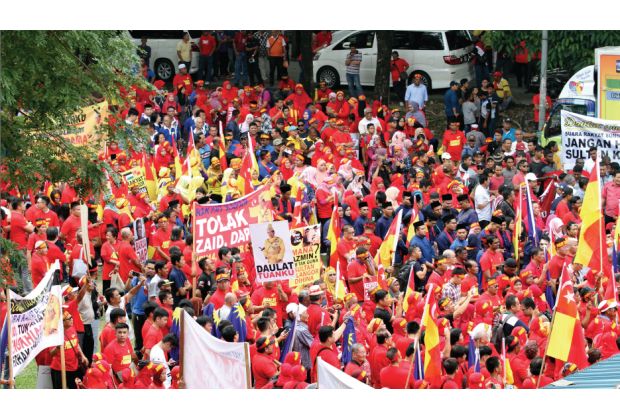 Noh, who is also Selangor Barisan chief, said a declaration of support for Sultan Sharafuddin and demands for action against Zaid and Dr Mahathir would be handed over to the Bukit Kayangan palace tomorrow.

“We want Zaid and Dr Mahathir to openly apologise to the Sultan. Secondly, we want the Selangor state government to stop the two of them from giving speeches at state premises.

“The police should not issue any permit for any assembly or political gathering in Selangor if the two are involved.

“Finally, we also want police to investigate and take action against Zaid and Dr Mahathir under the Sedition Act and any other law deemed suitable,” he said.

Zaid had tweeted that the Ruler should be “careful” with his words and that everyone would be affected if “the country burns”.

His tweets were believed to have been in response to the Sultan’s statements in an exclusive interview with The Star.

In the interview, Sultan Sharafuddin had warned that the deliberate use of sensitive issues to fish for votes in the general election would destroy the country.

In an interview with Utusan Malaysia later, the Sultan told Zaid, a former minister, to read his statement carefully and to get the facts right before speaking.

The Sultan also said that Zaid, who was born in Kota Baru, could go back to Kelantan if he was upset with the remarks he made against Dr Mahathir.