THE former wife of actor Datuk Adi Putra (pic) has lodged a police report alleging that he falsified their marriage certificate for business purposes, reported Kosmo!.

It said Norshaida Zolkifly, 34, also lodged a report with the Federal Territories Islamic Religious Council. She claimed that Adi Putra maliciously used their marriage certificate to do business overseas, using her name without her consent.

Adi Putra, whose real name is Mohamad Hadi Putra Halim, 36, could not be reached for comment and police confirmed receiving Norshaida’s police report.

She claimed that when they were married, Adi Putra had asked for her passport to apply for a visa to a foreign country.

As a loyal wife, Norshaida said she gave all her particulars to Adi Putra.

> The paper also published an interview on Dr Jezamine Lim, the wife of host and comedian Harith Iskander.

She was recently awarded a PhD in stem cell and tissue engineering by Universiti Kebangsaan Malaysia (UKM).

Dr Jezamine said that she will always be supportive of her husband’s career.

In the interview, she also spoke about their children Zander Xayne, five, Alessandrea Jayne, four, and Zydane Xayne, two, and why they were her inspiration in life.

On her great memories with Harith, she said that she had a memorable trip with him riding a Harley Davidson together to Port Dickson.

She said she loves to cook, adding that her “addiction” is coffee, which helps to ease her tension and stress. 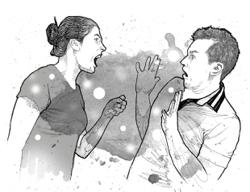 Dear Thelma: My curiosity about dating app has rocked my marriage