AWAY from politics and debates, durians and pineapples took the main stage at the Umno general assembly.

Yesterday, the 2,718 delegates who entered Dewan Merdeka were pleasantly surprised to find Musang King tree saplings placed on their seats.

Umno permanent chairman Tan Sri Badruddin Amiruldin announced that the plants were a gift from party president Datuk Seri Najib Tun Razak to encourage them to plant the trees, whose fruits were now in high demand in China.

Badruddin said a booklet containing instructions on how to plant and take care of the saplings was also given to delegates.

“This time, the souvenir from the president is special as it is a living thing. It is very symbolic as the seedlings represent life.

“You need to take care of it, plant it, water it and fertilise it. It is same with the party and people,” he said.

Ahmad Shabery also said Najib viewed agriculture as a new source of wealth, as Musang King is now selling at over RM50 per kg.

The saplings are currently priced at between RM30 and RM50 per plant.

“In places with high demand, some are selling at RM100 per plant,” said Ahmad Shabery.

The ministry also held a special pineapple sale at its booth, with some 250 fruits selling at RM2 each getting snapped up in less than 10 minutes.

Those who came later were left disappointed.

“These MD2 pineapples are the best in Malaysia as they are crunchy and sweet.

“The price is usually RM10 to RM20 per fruit, but we are selling it at RM2,” Ahmad Shabery said.

About 500kg of fruits, including pulasan, pomelo and bananas, were sold out at the booth. 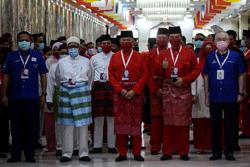 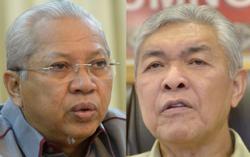