KAJANG: The follow-up investigation of a drug bust led narcotics police to bring down a ganja distribution syndicate led by a college student.

The initial operation on Dec 2 eventually resulted in the arrest of 12 suspected drug pushers, including four students.

District narcotics police had initially stopped three men in front of a hotel in Beranang, where they found ganja hidden in their bags.

Follow-up investigation led to three raids in Semenyih and Taman Unipark Suria on Dec 4 and 5, during which police found more than 4kg of ganja worth around RM12,000.

A mix of both large and small packets of ganja were found in the raids. The suspects, aged 20 to 26, were believed to be working for the same distribution ring. 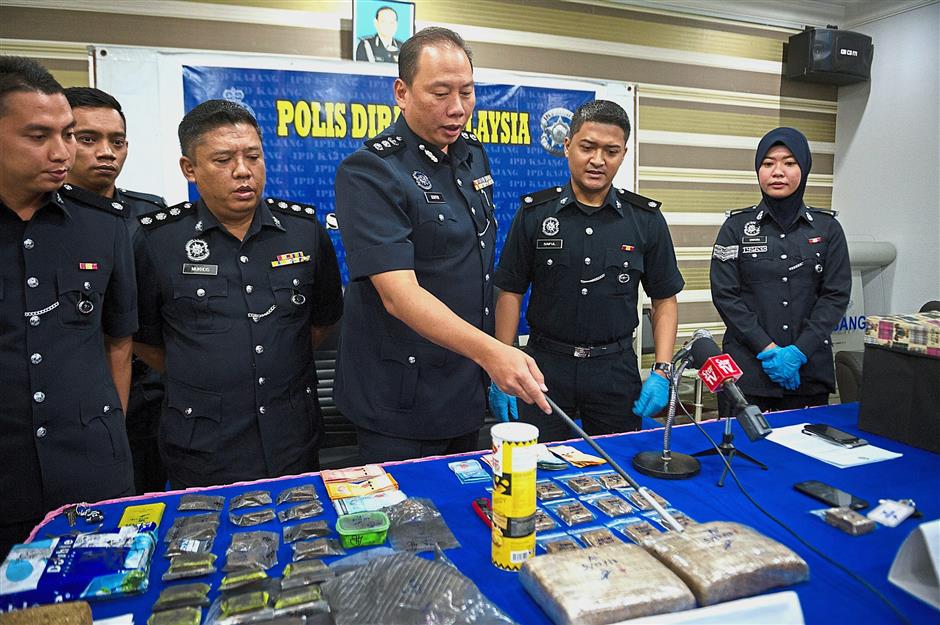 Student connection: Ahmad Dzaffir (centre) pointing out the seized drugs to the media in Kajang. — Bernama

District OCPD Asst Comm Ahmad Dzaffir Mohd Yusoff told reporters at Kajang police headquarters that the leader of the ring was one of the arrested students.

“The suspects are believed to have been distributing the drugs for about a year in the Semenyih and Kajang area.

“All 12 suspects also tested positive for THC (tetrahydrocannabinol) – the active ingredient in ganja.

“I also do not rule out the possibility that their market included students from other colleges and universities.

“While we have brought down the pushers, our investigations are still ongoing to locate their source,” he said.