KOTA KINABALU: The bullet-riddled carcass of another Borneo Pygmy Elephant has been found in Sabah's east coast.

The carcass of the bull elephant, with its tusks intact, was found in an oil palm plantation along Jalan Merotai-Kalabakan in Tawau on Tuesday. 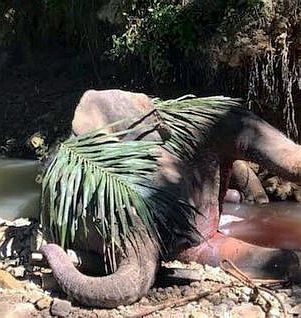 The carcass of the adult bull Borneo Pygmy Elephant found at the Ladang Cenderamata oil palm estate in Tawau.

Sabah Wildlife Department director Augustine Tuuga said on Thursday that it was likely the bull elephant was shot in another location but managed to escape.

The carcass of the elephant was found by plantation workers and wildlife rangers were alerted to the animal's remains.

The find was the latest killing of a Borneo Pygmy Elephant, an endangered species which numbers less than 2,000 in the wild.

On Sept 10, an elephant carcass was found in a plantation near Dumpas in Kalabakan and two weeks later another was found floating along the Kinabatangan river close to the Danau Girang Field Research Centre. Both carcasses were found with their tusks removed.