Standing together to stop the bullying

By LIM MAY LEE, SAMANTHA CHOW and HANIS ZAINAL

KUALA LUMPUR: After a spate of deadly school bullying cases this year, Star Media Group and property developer SP Setia have joined forces to call for an annual bullying prevention week in schools across the country.

The initiative, called #StandTogether, is spearheaded by Star’s R.AGE team and aims to make the first week of April every year a time to promote kindness and empathy in schools.

“There were over 14,000 school bullying cases between 2012 and 2015. These statistics aren’t just numbers, they are lives, each with a face and future,” said Star Media Group’s group managing director and chief executive officer Datuk Seri Wong Chun Wai.

“That’s why it’s important to make a stand and show students facing aggression they’re not alone.

“As a media company, it’s our responsibility to speak out and speak up on this issue.”

“We hope this event will encourage the Education Ministry to welcome the private sector’s involvement in schools.

“We also hope they will join us and see it as an opportunity for change in school communities.”

“It’s important for everyone to understand this isn’t an anti-bullying campaign,” she said. 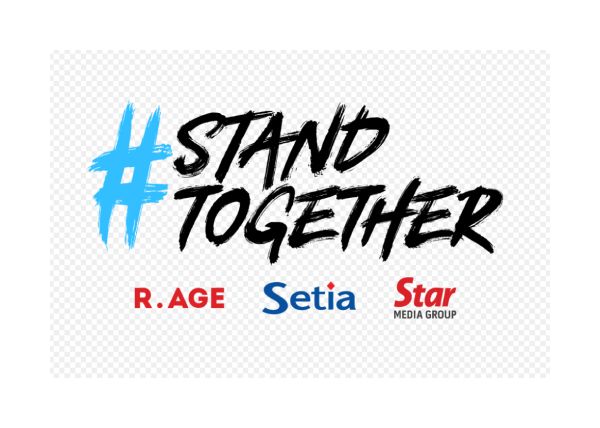 “We aren’t ‘anti-bullies’ – many of them are merely products of an environment we have created as a society. This is a campaign to promote kindness, empathy and unity. We’re here to stand together with victims and bullies to say ‘stop the bullying’. ”

Tengku Zatashah was joined at the launch by celebrities Lisa Surihani, JinnyBoy, Arwind Kumar, John Oommen and Jenn Chia, who shared their own accounts of being bullied during an emotional panel session where Lisa and Chia struggled to hold back tears.

“When I was in school, I was too afraid to speak up. But this campaign gives people a voice and hope, and that’s why I support it,” said YouTuber Arwind Kumar, a victim of severe violence and bullying in school.

R.AGE is working with students and key stakeholders to develop a five-day programme which volunteers can download and implement in their schools during #StandTogether week.

“We want to see parents and former students go back to their schools every April and be heroes to the children, by lending them an ear or teaching them to be kind to one another,” said Tengku Zatashah.

“Let’s make it part of our culture here in Malaysia where communities can be more invested in what goes on in our schools.”

Her model was crushed, now Lisa is role model for campaign

Tengku Zatashah: Putting an end to bullying is everyone’s task

Punishing bullies not the answer to end problem, say experts