Girl, 5, gagged and tied up by headmistress for being naughty in class

KUALA LUMPUR: An innocent role-playing game between two siblings led to a mother's discovery of her daughter's "punishment" in a kindergarten in Setapak.

Teng Aai Hong, 36, said her five-year-old daughter was tied up and gagged by her headmistress for being too noisy.

The incident would have gone unnoticed had Teng not catch her daughter gagging and tying up her two-year-old brother with a napkin at home on Nov 4.

"I scolded her and asked her why she was doing that. She told me that was what her teacher did to her when she was being naughty," said Teng.

A few days later, Teng confronted the headmistress of the kindergarten.

"She admitted to tying up my daughter but claimed that she didn't do anything wrong as that was her method of disciplining the students,” said Teng.

"She even went on to demonstrate her method by tying up another student," she added.

Teng has since removed her daughter from the kindergarten and lodged a police report on the matter.

She said due to the headmistresses' actions, her son could have suffocated had she not intervened at that time.

Chong added that the headmistress should have known better than to resort to such disciplinary methods, especially when it involved the safety of young children.

When contacted, a police spokesperson said they are investigating the case. 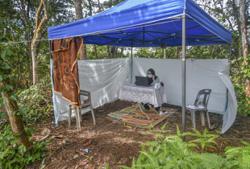