Malaysia's gambling law to be tweaked to combat illegal gambling

The Home Minister said that the Common Gaming Houses Act 1953 is being studied to see where changes could be made.

"The (Home) Ministry, together with the police, are working with the Attorney-General's office to see if a full change (is needed) to the Common Gaming Houses Act 1953 to reflect new elements in gambling crime," said Dr Ahmad Zahid, who is also Deputy Prime Minister.

He added that his ministry is also considering new preventive laws that would tackle non-conventional ways of gambling such as online gambling through the use of smartphones.

"We are also collaborating with Interpol to create a firewall for telcos to prevent this from spreading," he said after a TN50 dialogue session on security with Youth and Sports Minister Khairy Jamaluddin at Universiti Putra Malaysia on Tuesday.

Dr Ahmad Zahid also said that there have been over 5,000 operations conducted against illegal gambling since Tan Sri Mohamad Fuzi Harun became the Inspector-General of Police in early September. 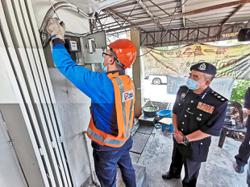