MANILA: Holed up with about 30 Islamic State (IS) gunmen in a Marawi City mosque and surrounded by Philippine security forces, Malaysian militant Mohd Amin Baco @ Abu Jihad has put out feelers indicating that he wants to surrender.

According to Philippine intelligence sources, Amin Baco is acting as the leader of the IS and Maute group gunmen who are hiding in the mosque in Sabala Manao village in Marawi City.

“Amin Baco had contacted the Joint Intel Task Group about their surrender and it is in process,” said an intelligence source.

However, Philippine security for­ces might not wait as they are softening up the fortified hiding place with snipers for an eventual assault against the militants.

According to the Philippine Arm­ed Forces, government troops are zeroing in on three sons of Isnilon Hapilon, the slain emir of IS in South-East Asia, and two Malaysians including Amin Baco, who has been central in facilitating the movement of foreign fighters in the region.

Amin Baco, who is from Tawau, Sabah, married into a prominent Abu Sayyaf Group (ASG) family in Jolo island in southern Philippines.

His father-in-law is the late Ha­­tib Sawadjaan, head of an ASG faction.

Tense situation: Soldiers standing guard inside the war-torn area in Marawi City where Amin Baco (pic, above) is hiding with 30 IS militants in a mosque. —Reuters

The 34-year-old Sabahan was a member of Darul Islam Sabah (DIS), an offshoot of Indonesia’s Darul Islam and Jemaah Isla­miah.

He is believed to have moved around Sabah and Indonesia, facilitating militant travel and arms smuggling between the two locations.

Amin Baco has been on the wanted list since a 2006 crackdown against DIS which saw 16 of its mem­­bers arrested under the now-abolished Internal Security Act.

He teamed up with a stateless 30-year-old Sabahan of Filipino descent, Jeknal Adil @ Jek, to kidnap cousins Tung Wee Jie and Tung Wee Wei on Nov 14, 2012, from their birds’ nest farm in Tambisan, Lahad Datu.

In recent days, the Philippine mi­­litary has been saying that the end of fighting in Marawi City is in sight. 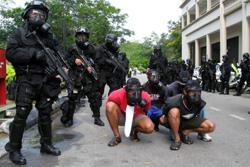