Datuk Seri Najib Tun Razak said this method – which was introduced during the submission of tenders for the Mass Rapid Transport project – would also prevent allegations of favouritism and bias when awarding work to private companies.

Najib, who chaired the tender com­mittee, said it had no clue of the identity of companies whose applications were being processed because the proposals were merely marked with lettering and not the company’s name or logo.

“Only after the committee had decided which proposal to accept was I given a letter to inform who the project was awarded to. It’s like the Academy Awards,” he said in re­­lating the move to guests atten­ding the opening of the Malaysian-Anti Corruption Commission’s (MACC) new headquarters at Pre­cinct 7 and the anti-graft body’s 50th anniversary.

The Prime Minister attributed the “anonymous” process as the reason why the MRT Sungai Buloh-Kajang line was completed “according to schedule, below budget, had no problems and was scandal-free”.

“I will ensure that major projects will be handled through this system. It has proven successful with each offer evaluated professionally from technical and cost aspects,” he added.

Reiterating the Government’s commitment in supporting the MACC’s fight against corruption, Najib also described the menace as a threat to the country and the people.

“If we are able to fight this, God willing, Malaysia will be a successful country that is respected, ad­­vanced and progressive. We will be able to achieve our aspirations and goals if we can get rid of this pro­blem,” said Najib.

He said under the Government Transformation Programme, seve­ral initiatives were put in place to improve transparency and fight corruption, including the setting up of compliance units at critical en­forcement agencies such as police, Immigration, Customs and Road Transport Department as well as the MACC itself.

To add to the initiative, close-circuit televisions will be installed at Immigration and Customs departments to monitor the actions and activities of enforcement personnel as well as the public dealing with them.

The Prime Minister also named the Whistleblower Protection Act, the “Name and Shame” database and the setting up of 14 special corruption courts to expedite hearing of corruption cases as among the efforts to tackle the issue.

Touted as the biggest complex in the world to house an anti-corruption body, Najib said the new building sealed the Government’s commitment to help fight corruption and power abuse. 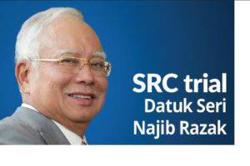