The signboard placed at the entrance to the launderette. - Picture from Facebook

PETALING JAYA: A self-service launderette in Muar, Johor is limiting its clientele to Muslim customers only.

The matter first came to light when a photo, believed to have been taken at the launderette, showing an 'Only For Muslims' sign went viral on social media.

The sign also asked customers to remove their shoes before entering the premises.

The 40-year-old operator, who was interviewed by a Chinese daily on Saturday, said he was just carrying out his duty as a Muslim.

He said he welcomed Chinese and Indian Muslims to his launderette and that non-Muslims could visit other nearby launderettes.

He, however, declined to comment on whether he had imposed the rules as he worried that there might be "unclean" elements such as dog fur on the clothes non-Muslims brought to his launderette.

The operator also did not allow the Chinese daily reporter to take his photo.

Meanwhile, a Malay daily reported Johor mufti Datuk Mohd Tahrir Samsudin as saying that the launderette's move was commendable as cleanliness is a priority for Muslims.

"This should not be turned into an issue as it only encourages negative perception from non-Muslims towards Muslims.

"I think it is a good move as Muslims will no longer be doubtful when using the self-service launderette," the daily quoted him as saying.

The launderette's move has received mixed reactions from netizens, with some praising the move and others questioning the motive for segregating customers based on their religious backgrounds. 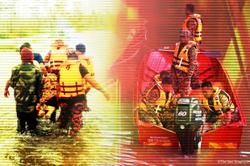