JPJ officer recommended no action to be taken against D-G, court told

PUTRAJAYA: A former Road Transport Department (JPJ) investigating officer recommended that no action should be taken against the department's former director-general Datuk Yusoff Ayob for driving on the emergency lane, but this was overruled.

Zailani Zainal Abidin said he suggested this to his immediate superior after recording a statement from the 58-year-old Yusoff during his investigation.

"I suggested to my immediate boss that no further action should be taken against Yusoff and he agreed, but two other superiors disagreed," he said when replying to a question by Yusoff's counsel Datuk Baljit Singh Sidhu during cross-examination on Wednesday.

Zailani – who is now an assistant enforcement officer at JPJ's Wangsa Maju branch – was giving testimony in the trial of Yusoff, who was charged on July 18 with driving a vehicle with the plate number BLY 68 on the emergency lane in Lingkaran Putrajaya here at 6.27pm on Oct 7 last year.

He was accused under Rule 53(1) of the Road Traffic Rules 1959, punishable with a fine of not more than RM2,000 or up to six months' jail upon conviction.

Yusoff was transferred to the Public Service Department on July 21 this year.

The fifth prosecution witness also agreed to another question by Baljit that there was traffic congestion on Lingkaran Putrajaya due to a collapsed bridge.

Zailani also agreed with Baljit that Yusoff had used the emergency lane to find out the cause of the congestion.

During re-examination, Deputy Public Prosecutor Muhammad Izzat Fauzan asked Zailani to tell the court what happened during the process of taking the statement from Yusoff.

Zailani replied that "Yusoff went to the left lane as there was congestion and that he wanted to know what caused the jam".

He also said that he did not know that Yusoff was monitoring the congestion at that time.

Ahmad Zaid, who was the first prosecution witness, said he was at Lingkaran Putrajaya for two and half hours and saw a black Proton Inspira car using the emergency lane, and he proceeded to take about 20 photographs of it, without knowing that Yusoff was behind the wheel.

Five witnesses were called by the prosecution to give their testimony in the trial of Yusoff before magistrate Muhammad Zaki Abd Kudos Wednesday.

Magistrate Muhammad Zaki later fixed Thursday for submissions at the end of the prosecution's case. 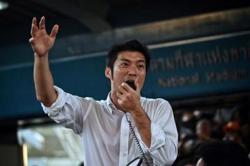