Police investigating tahfiz fire as mischief by fire and murder

By JASTIN TARMIZI and VICTORIA BROWN 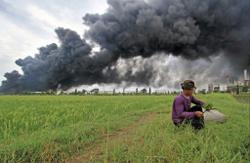 KUALA LUMPUR: Following the arrest of seven youths in connection the deadly fire at the Darul Quran Ittifaqiyah school, police are investigating the case as mischief by fire and murder.

The youths aged between 11 and 18 will be remanded until Sept 22. The case will be investigated under Section 435 of the Penal Code for mischief by fire and Section 302 for murder.

Amar said that the motive was believed to be from a misunderstanding due to teasing between the suspects and some of the tahfiz students several days before the fire.

"When the investigation was carried out, it was revealed that their motive was to burn the school. Their basic intent was to cause mischief by fire.

"But maybe because of their age, they didn't know that their actions would lead to the final result," he told a press conference on Saturday.

He also said that two of the youths also had police records - one for rioting and another for theft of a vehicle.

Amar said some of the youths are school leavers while others were schooling in the area. Police also seized clothes, helmets and a motorcycle from the suspects.

Amar added that investigations show that an accelerant was used and that two gas cylinders were moved from the lower floor of the school to the upper floor.

Amar also urged the public to stop the circulation of viral messages regarding the case.

"Stop this, because it will affect the investigation and the process in court," he said.

The 5.15 am fire at the tahfiz school resulted in the death of 21 students and two teachers. Six others students sustained injuries.