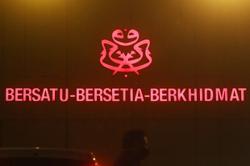 Easy does it: Ahmad Shabery cutting tuna with help from GST Group consultant Tetsuya Yanagida (right). With them is Tan (left).

BUTTERWORTH: The Agriculture and Agro-based Industries Ministry hopes to achieve a nationwide catch of 130,000 tonnes of tuna worth RM1bil, cumulatively from now until 2020.

Its minister Datuk Seri Ahmad Shabery Cheek said the ministry, through the Fisheries Department’s efforts, is also looking forward to catching RM300mil worth of tuna from the Indian Ocean alone over the same period, by issuing licences to 135 vessels.

“The ministry, through the Fisheries Department, has issued licences to 17 vessels and approved 93 permits for companies to buy or build new fishing vessels.

“The majority of tuna caught in Malaysia at present are of the skipjack and longtail species, and we are hoping to increase the landing of deep-sea species such as bigeye, albacore and yellowfin,” he said at a tuna landing ceremony at Dermaga Air Dalam here yesterday.

Ahmad Shabery added that the Fisheries Department was aiming to land 3,000 tonnes of tuna worth RM60mil in Penang this year.

“As of early September, 1,100 tonnes of the fish have been landed in Penang, so achieving the target is possible, through the combined efforts of the public and private sector.

The IOTC is an intergovernmental body that coordinates the management of tuna stocks in the Indian Ocean.