However, he said that the consortium's customers have yet to settle almost RM1bil in outstanding bills.

"IWK does not simply take stern action, which would inconvenience customers, but I want to stress that paying bills promptly is very important," said Mohamed Haniffa.

He added that IWK has been proactive in its to enhance public awareness on the importance of sewerage services through various programmes, meeting with customers, sending reminder letters and organising awareness campaigns.

Mohamed Haniffa said that although IWK was deluged with a high amount of outstanding bills, the national sewerage company was able to stay active for more than 20 years thanks to the efficiency of its management and staff.

He said the fact that IWK had managed to continue providing its service with a domestic charge of RM8 a month also proved the government is committed to putting the people first.

"We have not reviewed our rate for 20 years. This clearly shows that the government has played a big role, especially by providing allocations for IWK operations," added Mohamed Haniffa.

He said IWK now has 3.6 million customers in 87 local authority areas, except in Johor Bahru and Pasir Gudang in Johor, as well in Kelantan, Sabah and Sarawak. 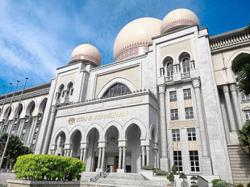 The Week That Was: Courting tech