PUTRAJAYA: The National Registration Department (NRD) director-general is not bound by any fatwa or religious edict issued by the National Fatwa Committee to decide on the surname of a Muslim child conceived out of wedlock.

In a 29-page landmark judgment, Justice Datuk Abdul Rahman Sebli said the director-general's jurisdiction was a civil one and confined to determining whether the child's parents had fulfilled the requirements under the Births and Deaths Registration Act 1957 (BDRA) which covered all illegitimate children, Muslim or non-Muslim.

He said the director-general was guided by procedure under the BDRA and his duty was to allow the registration application if all requirements under the BDR were met.

Abdul Rahman said the BDRA did not envisage the application of any substantive principle of Islamic law in the registration process, adding that Section 13A (2) of the Act allowed for the surname of the illegitimate child to be in the name of the person acknowledging himself to be the father of the child.

He said the NRD director-general acted irrationally in refusing to alter a child's surname from "Abdullah" to the name of the child's father in the birth certificate on the purported ground that according to the fatwa issued by the National Fatwa Committee, the child could not be ascribed with his father's surname as he is a illegitimate child.

"A fatwa, we reiterate, is not law and has no force of law and cannot form the legal basis for the National Registration director-general to decide on the surname of an illegitimate child under Section 13A (2) of the BDRA.

“A fatwa issued by a religious body has no force of law unless the fatwa or edict has been made or adopted as federal law by an act of Parliament, otherwise a fatwa would form part of federal law without going through the legislative process.”

He said Section 13A (2) of the BDRA did not give the power to the NRD director-general to override a father's wish to have his name ascribed as his child's surname.

"Nor is it a provision that empowers him to decide upon himself that the child's surname should be ‘Abdullah’,” the judge said, in allowing the appeal brought by a couple and the child whose names the court withheld to protect the child's identity.

“And it does not say that in the case of a Muslim child, his surname must be ‘Abdullah’.

"A fatwa issued by a religious body involves purely the administration of Islamic law or Hukum Syarak and has nothing to do with the National Registration director-general's duty under the BDRA to register births and deaths in the states of Peninsular Malaysia.”

The couple had asked the court to compel the NRD director-general to replace the surname "Abdullah" with the name of the child's father in the birth certificate.

The couple, both Muslims, were legally married in 2009 and the child born in Johor in April the following year, which was five months and 24 days (five months and 27 days, according to the Islamic Qamariah Calendar) which was less than six months from the date of their marriage.

The child's birth was only registered two years later as late registration under Section 12 (1) of the BDRA and the couple jointly applied for the father's name to be entered in the register as the father of the child.

However, in the child's birth certificate issued on March 6, 2012, his surname was given as “Abdullah” instead of the father's surname.

This prompted the couple to file a judicial review at the court.

The judicial review application was filed by the child through his next friends, who are his parents, and named the NRD, its director-general, and the Government of Malaysia as respondents.

In his judgment, Abdul Rahman said it was not a requirement of the law that the birth certificate of an illegitimate child must be endorsed with information from Section 13 of the Act, as this section merely sets out the procedure for the father to be registered as the father of the illegitimate child and did not mandate the insertion of the information in the birth certificate.

"We believe Islam does not condone such open and public humiliation of an innocent child," he said.

"Unfair as it may appear to be, the 1st appellant (the child) will have to carry the stigma of being an illegitimate child for the rest of his life, a classic case of being punished for the sins of his parents, who had in fact legally married before he was born.”

"One can imagine the 1st appellant's (the child) grief, not to mention the feeling of shame that he has to bear throughout his existence.

“A birth certificate serves as a poignant reminder of one's birth into this transitory world. It should not be turned into an instrument of shame," he said. – Bernama 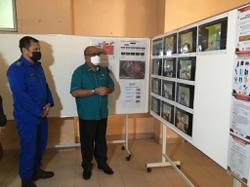