A WOMAN in Johor Baru who borrowed RM2,000 from an Ah Long ended up being RM17,500 in debt to 12 gangs of loan sharks, reported China Press.

The 38-year-old woman, known only as Lee, said she borrowed RM2,000 from one loan shark in November after running into some financial problems.

“After that, I received several messages from other Ah Long gangs asking me to borrow from them to repay my earlier debt,” she said.

The loan sharks, said Lee, demanded that she paid up by 4pm every day or she would be “fined” RM800. If she failed to pay by midnight, it was an additional RM800 fine.

She claimed that the gangs had been harassing her since April with messages and phone calls and even threatened to “call on her” at work.

Yap said he had arranged a meeting with all the loan sharks and found that they were from four illegal money-lending companies.

“After discussing with them, we agreed to repay RM13,000 to settle the entire debt. But after paying the money, Lee still received several calls claiming that she still has RM2,000 in debt left,” he said, adding that he would lodge a police report if the gangs continued to harass the woman.

Lee, who is married with two school-going children, said she only earned RM2,500 a month and hoped that the Ah Long would stop disturbing her.

> Oriental Daily reported that a restaurant in an oil palm estate in Pekan Gurney in Man-jung, Perak, had more than food on its menu.

Police raided the restaurant at 6.30pm on Tuesday and found that it had been providing “additional services” for customers.

“The customers could also take the women out after their dinner,” he said, adding that the women were from China, Vietnam and Thailand.

He said when the police arrived at the scene, the GROs tried to escape but were caught. 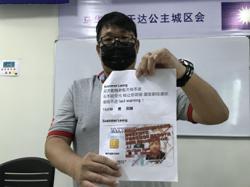