We don’t use boric acid in our rice dumplings, say sellers

The Star visited four bak chang stalls around George Town yesterday and the operators all claimed that boric acid was no longer being used since it was prohibited under the law.

An operator in Weld Quay said boric acid was once a necessary item to be added in the water while steaming the dumplings, but not anymore.

“It was during our grandmother’s time where they used boric acid to make the glutinous rice stick toget­her, and also to prolong the delicacy’s shelf life.

“But now, we are not using it anymore,” she said.

“As long as we wrap the rice in bamboo leaves skilfully, the rice will stick together.

“We also don’t need to have long shelf life for our dumplings sell out fast,” she said when met at her shop.

The trader added that Health Department officers would conduct checks on their products to ensure the dumplings do not contain boric acid.

“We don’t want to be penalised,” she said.

Another seller stress­ed that as food sellers, food safety is their responsibility.

“We use imported and high quality ingredients, and we don’t use boric acid and raffia strings, which may harm the health and safety of our customers,” said the 38-year-old man.

Meanwhile, a bak chang seller who operates from a truck in Burmah Road and a kuih seller in the Macallum Street market said the dumplings they sold were homemade and were safe for consumption.

A homemade bak chang maker said while many sellers do not use boric acid for the meat rice dumplings, the chemical is still widely used in khnee chang (sweet dumpling) for better texture.

A Chinese daily reported that they had sent rice dumplings for lab tests and the results revealed that rice dumplings sold at the clan jetty, George Town area and Macalister Road contained boric acid.

Boric acid, which is linked to adverse health effects, is a prohibi­ted item under the Food Regulations 1985.

According to the Health Ministry website, people who have consumed food with high level’s of boric acid will experience nausea, vomiting, diarrhoea, dermatitis, abnormal function of kidney, acute dysfunction of blood circulation or death, depending on the level of boric acid absorbed by the body.

In 1988, boric acid was associated with the deaths of 13 children and an adult in Perak.

It was believed that the loh see fun they ate was tainted with boric acid. 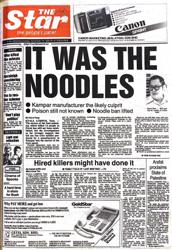