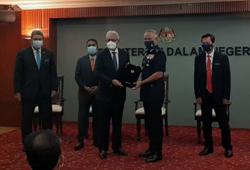 KUALA LUMPUR: More than 400,000 people are believed to have invested in the JJ Poor To Rich (JJPTR) money game.

“Unfortunately, only 10 people have come forward to lodge police reports so far,” he told reporters after launching a commercial crime prevention programme at a shopping mall here yesterday.

The latest police report was made by a victim in Taiping, Perak, on Friday.

Comm Acryl Sani said police were sifting through the documents seized, while investigators were collecting more documents from JJPTR’s office.

Police were also considering using the Prevention of Crime Act to tackle the case, he added.

“We are working together with Bank Negara and the Companies Commission of Malaysia on the investigation.

“We will see how our investigation turns out before deciding on the next course of action,” he said.

Comm Acryl Sani said while there were genuine victims who fell for these money schemes, there were also people who invested knowing that these games were risky.

“They come in early, invest big and leave once they have made a profit. They do this so that once the scheme no longer works, they are not in it anymore,” he said.

He advised the people not to be gullible and fall for schemes offering high returns.

“No one out there can guarantee a 20% return on your investment,” he said, adding that Malay­sians lose an average of RM1bil yearly to fraudsters.