SERDANG: A blind senior citizen in a viral video has apologised for using aggression to obtain donations from the public.

Admitting that it was his modus operandi, Khor Chai Wing (pic), fondly known as "Uncle Luke", said he has a bad temper and suffers from mental illness.

"I am sorry for four things: number one, for standing in the middle of the road. Number two, I am sorry for being born 100% blind.

Khor, who just turned 63 last week, also admitted that he had hit some people who tried to help him or refused to buy his products ranging from magazines to stickers to lottery tickets.

"I also assaulted some of them by pulling their shirts for refusing to buy from me. I got angry I couldn't sell (anything).

"I was angry because the sales were not good at that time," he said, adding that it was not his intention to hurt people.

Last week, Khor was spotted demanding money by obstructing traffic in Bangsar in a video that was widely shared on social media.

In the video, he was heard telling a passer-by that he would not budge from the road until he was given some money.

Responding to this, Khor said he was aware of what he did and that he was sorry for doing so.

Asked how much he sold his wares for, he said it was up to the public so he could at least buy "a bag of rice".

He said after the video made its rounds, he noticed that fewer people came forward to help him.

"Not many (now) but when I was in Taipan (USJ) the other day, there were some who helped me," he said.

Khor, who sells his products around the Klang Valley, also said there were some incidents where the police had to step in because of complaints from the public.

"But I was only let off with a warning," he said.

Having been in and out of mental institutions in the 1970s, Khor is now part of a disabled community called OKUnetwork where he is given aid and shelter.

He is rarely in contact with his family members, who live in Johor and Selangor.

However, Khor said he would try to change for the better after the recent incident.

"I will try my best not to do this kind of thing again. I will try to control my temper when I am out doing sales," he said.

Those who wish to reach him may e-mail myokunetwork@gmail.com. 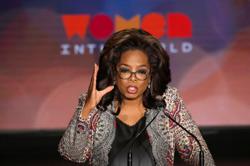