KUALA LUMPUR: There is good news for aspiring homeowners in the city who are still saving up to buy their own place.

The first project, known as the City Apartments @ Sungai Udang, Segambut (Pangsapuri Bandaraya @ Sg Udang, Segambut), comprises 1,251 units of three-bedroom apartments that will be rented out at RM800 a month to qualified applicants.

Tenants will only be allowed to rent the units for a maximum of five years, after which a new batch of tenants will move in.

The biggest benefit for those who rent the units is that each month, RM300 of the RM800 rental payment will go into what Najib called a forced savings that will be returned to the tenant once his or her rental term is up.

The money from the forced savings, which can total RM18,000 for a tenant who rents for five years, can be used as a deposit to buy their own house elsewhere.

“This project is the first of its kind in the country and is a unique concept.

“It is designed to help those earning RM10,000 and below a month, and the Government will roll out a few more similar projects in Kuala Lumpur in time to come,” Najib said at the project’s groundbreaking ceremony here.

The project developed by Kuala Lumpur City Hall (DBKL) is expected to be completed in December 2019.

Najib said the rental rate was a bargain for an apartment located 15 minutes from the city centre, as current rental rates for similarly sized units in the area are between RM1,500 and RM2,000 a month.

The Prime Minister said the project was one of many that the Barisan Nasional Government would continue to roll out in accordance with its principle of putting the rakyat first.

“Wherever there are members of society who need help regardless of whether they are in the urban or rural areas, our approach is to make sure that no one is left behind.

“The Government of today understands what we need to do to ensure the people’s well-being,” said Najib, who is also Barisan chairman.

A DBKL official said information on the application process for the project would be announced in due course.

In Putrajaya, Joseph Kaos Jr reports that Urban Wellbeing, Housing and Local Government Minister Tan Sri Noh Omar said a total of 10,000 such units would be built under the project, adding that the ministry was in the midst of identifying other sites to build the homes.

Noh also announced that 4,800 studio apartments, measuring 400 to 650 sq ft, would be built based on a similar concept on a piece of government-owned land in Batu, Kuala Lumpur, starting July.

“There are one-bedroom units which are suitable for single youths, and a two-bedroom unit which would suit young couples,” he told reporters after his ministry’s monthly assembly. 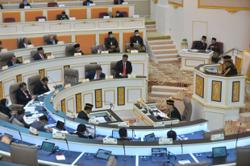