Only 1% of Malaysians are donating their organs 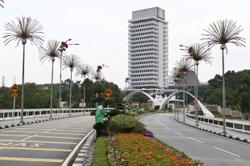 ONLY 1% of Malaysia’s population have pledged to donate their organs upon death, the Dewan Rakyat was told.

Deputy Health Minister Datuk Seri Dr Hilmi Yahaya said a total of 381,353 people had signed up as organ donors as of Jan 31.

The number, he said, was too low as it only represents 1% of the population.

The Health Ministry, he said, would continue to carry out programmes targeted at raising awareness on organ donation.

“The number of Malaysians who have pledged their organs for donation is considered low compared to developed countries where their numbers are as high as 30% to 40% of the population,” he said in reply to a question from Datul Fauzi Zahari (BN-Setiawangsa) during question time.

Fauzi had asked the Health Ministry to state the figures of those who had pledged to donate their organs and the statistics of patients who are in the Government's waiting list.

Hilmi also revealed that kidney patients were the majority waiting for organ transplants, with 31,084 patients nationwide.