These were among the gifts given to Indonesian officials by their Saudi counterparts during the visit of King Salman Abdulaziz Al Saud earlier this month.

A list of the gifts, which were declared by government officials, was released by Indonesia's Corruption Eradication Commission (KPK) on Thursday.

KPK spokesman Febri Diansyah did not identify the recipients of each gift but he told reporters that based on a preliminary valuation, the gifts could be worth more than 5 billion rupiah (RM1.6mil).

It is customary for royalty or heads of states to exchange mementoes or gifts during official visits but few are known to lavish on their hosts as well as the Saudis.

Although the police had planned to display the sword at its headquarters, the gift was duly declared to the KPK.

This is because Indonesia's anti-graft laws require all government officials to report any gift or cash they receive to the KPK within 30 days of receiving them.

It was the same for the Foreign Ministry, which also reportedly received a sword from the Kingdom during the visit.

King Salman's visit from Mar 1 to 12 was the first by a Saudi monarch to Indonesia in 47 years. It included a royal entourage of 1,500 people, including 10 princes and 25 ministers.

The King also went for an extended holiday in Bali, where he stayed at the St Regis Bali resort, which closed part of its beach to the public for the monarch.

According to the Jakarta Globe news, Bali authorities said the King left the island with almost 17 tonnes of cargo, comprising more than six tonnes of local purchases.

These include billings for hundreds of hotel rooms, the rental of 300 limousines, as well as visits to tourist spots and shopping.

King Salman's Asia tour also included stops in Malaysia, Brunei, Japan and China. He also plans to stop over in the Maldives as well as Jordan before heading home. - The Straits Times/Asia News Network 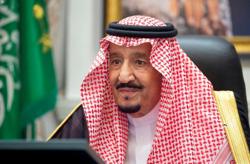